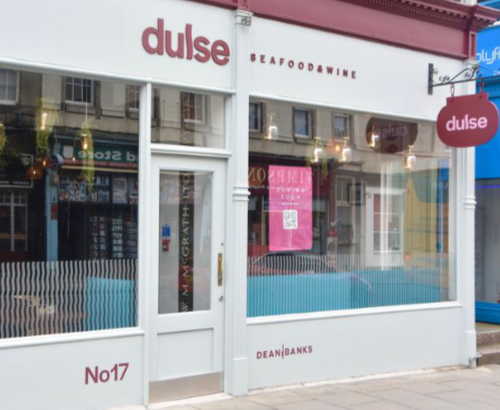 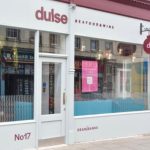 One door closes, and all that. For many years this building was home to Fred Berkmiller's L'escargot blanc. It was a regular haunt of ours, even more so when he opened the terrific wine bar on the ground floor. It sat empty for year or more, a sad monument to the way COVID devastated the hospitality sector. Then, a bright ray of sunshine. It was freshened up, painted and reopened under the ownership of the energetic Dean Banks.

If you don't know Dean Banks by now, you've clearly not been following Tom's Food! enough. He nearly won Masterchef: The Professionals. He set up Haar in St Andrews which then closed, not because of the Great Plague, but apparently because of a dispute with the landlord.  He then resuscitated it in a new location, having also established Haar at Home, a nationwide food delivery business. He was then appointed to take over the glorious Pompadour Room at the Caley, now the Waldorf Astoria. Dean Banks at the Pompadour scored very highly in the column a year ago.

For normal folk that would be enough, but he has now added this place, Dulse, to his empire. How does he do it? I asked one of the cheerful waiters. Hiring good people and trusting them seems to be the model. I note that Dan Ashmore, a good friend to Tom's Food! has returned as Executive Chef, having spent a year getting Gordon Ramsay's Bread Street Kitchen up and running.

L and I had popped in for a quick glass just after Dulse opened, but we shared just a single plate. This visit was with PM, another retired solicitor from a highly successful practice up north. We became pals via this column, and meet up when she's in town.

A stroll up the Water of Leith is an excellent way to work up an appetite, and provides plenty of shade on a baking hot day. PM had never beaten the path. When she lived in Edinburgh in the 1970s it wasn't well known, if indeed there was a path at that time. Half an hour later and we are shoehorned into a comfortable table in Edinburgh's West End. Plenty of opportunity for people watching on Queensferry Street. Verdict? We Scots are not a beautiful race and we don't dress well in hot weather. Fortunately the verdict on the food was a lot more positive.

I'd seen the menu on my previous visit. Be warned, it's exclusively fish and seafood. There is nothing for the meat eater or vegetarian. If you exclude the couple of desserts it's a sharing plates menu, one of those where the food comes out as and when it's ready. We didn't go for any of those which were obviously priced as mains. I'm not sure if that would have affected the delivery rhythms. What I hadn't previously seen was the lunch menu. From a list of seven savoury plates and two desserts you can have two plates for £19, which is terrific value, especially if you avoid pud as I usually do. Most of our preferred choices were on there though we did add in a lobster dish from the a la carte. Note that three of the dishes on that menu are priced at market rate. Those which were quoted on the day didn't seem out of the way, but they will vary. Don't be afraid to ask. I was once badly rooked in a dismal portside place in Marbella, having failed to ask in advance, and have never made that mistake again.

An Arbroath Smokie tart, appropriately, headed the list. I say appropriately since that's where Dean hails from. It was a crisp tart made, I think, with a couple of layers of filo pastry. A perfectly balanced creamy fishy filling was flavoured with the eponymous dulse, a type of seaweed. I've never cooked octopus. PM said she tried once and ended up with something the consistency of a Michelin tyre. (Other makes of tyre are available.) Here it was beautifully tender, and came with a burnt tomato sauce topped with lemon infused barley and a fringe of parsley oil. Striking in both appearance and taste.

I'm guessing they do their own fish curing inhouse. Certainly the trout pastrami was a flavour of loveliness. In the cure we could detect ginger and either juniper or gin, perhaps both. I'm sure there was much more. But the star of the show was the lobster crumpet. A fat crumpet was oozing with butter and other things. PM thought she detected Pernod. The little lobster pieces on top were seasoned with tarragon, inter alia. This really was quite stunning. My only quibble was that it seemed a little steep at £19 while a half lobster was only £3 more.

Occasionally people ask me to justify  my scoring system, though most of you by now can't be a**ed. What I can say is that the places with the highest food scores are the ones that make you go, wow! We did quite a lot of that.

On the negative side, the service levels brought the final score down a bit. More than charm is needed. The ordered bread failed to materialise and, quite inexplicably, no sugar arrived for the (very good) coffee, even when specifically requested. Easily enough remedied with a wee bit more training.

In short, I'd happily recommend this to any fish lover. Stick to the set lunch menu and it's terrific value. But a word of caution. We were there on a weekday and the website is silent on whether that is available at weekends. If that's important to you, check first. On second thoughts, just go anyway.