Dean Banks at The Pompadour 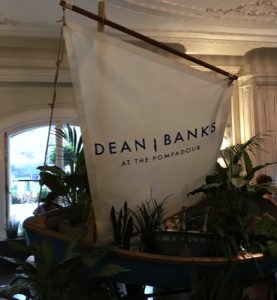 Dinner Only (Wednesday to Sunday)

Come with me softly, up a staircase and down a passageway seldom trod of late. COVID is partly to blame but the fault lies at the door of management, as it so often must. Not only do the eejits who run this hotel (quite separate from today's restaurant) persist in trying to call The Caley the Waldorf Astoria, they were also stupid enough, way before lockdown, to close down the most beautiful dining space in the Capital. Until a couple of weeks ago, that is. As signs of recovery go, forget the number of people who have had the second jag. Rejoice instead that The Pompadour has returned.

Under the banner of Dean Banks. His name is proudly emblazoned on the dinghy which greets you as you enter. Eh? And someone has stolen all the table cloths. And replaced the once elegant tables with things that you can't get your legs round. Don't get me started on dining room designers. In short, the first impressions weren't the best. Our nerve endings after attempts to acquire a horribly over priced aperitif in the (unconnected) hotel bar downstairs were still raw. The starkness and discomfort didn't initially improve things.

Ah, but then... Now normally an ah but precedes something unpleasantly unexpected. Here, on the other hand, we had had the storm before the calm. As the whole world knows, a glass of fizz can soothe almost everything, especially when delivered by the lovely Carina. Or when we were greeted by a trademark tweed jacket and a pair of specs which were vaguely familiar. We've met before, I suggested. Pretty soon we worked out that he had relocated from Haar, Dean's first solo venture, which was reviewed in this column last year. Sounds daft, but we suddenly felt we were among friends and the mood lifted.

Chef's rise to fame has been meteoric since he was a finalist on Masterchef: The Professionals. With food like this it's unsurprising. He has travelled extensively, which is reflected in the menu. In the modern idiom, lists of ingredients are given, including kimchi, gochujang, mirin butter, tamarind and yuzu. (Don't worry, not all in the one dish.) The format is a five course tasting menu with a couple of optional extra courses in the form of lobster and cheese. L was less happy when I told her in the taxi that it was a tasting menu and, truth be told - would I lie to you, ever? - I had my own reservations.

Why? Well there's usually far too much chat, as servers bang on about the provenance of each and every ingredient, breathlessly inviting you to swoon at chef's ingenuity. Not here. The staff have been trained to assume that we can read, and let the food do the talking. That's after our bouches have been suitably amused, of course. Three mouthfuls were delivered. I forget the first one, apart from the fact that it was darn good, but there was a glorious crispy tartlet topped with smoked trout. In a mini steamer was a lobster won ton, which was the only dish of the night which failed to elicit an OMG response, the casing being a little too thick.

With the appetite well and truly tickled, we would have appreciated the arrival of the bread (from Wild Hearth in Comrie) a little earlier in the proceedings. (Careful readers will notice how I am struggling to find anything uncomplimentary to say about our night out.) But then the food started to flow in good order. A king scallop came in a dashi broth. Any eastern flavours have the ability to smack you in the face if not handled with care. I don't mind that, but no such worries here. The balance was perfect throughout. An elegantly presented piece of slow cooked beef cheek had a remarkable depth of flavour. Without the menu I wouldn't have detected the presence of the gochujang (a Korean paste), but the gurgles of appreciation were steadily rising. 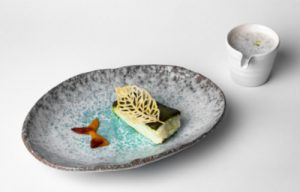 Cod came from the North Sea via Thailand, the Thai green crumb, lemongrass and coconut blending with a rare subtlety. It also featured a leaf garnish, which could have been filigree work but turned out to be potato. Then a complete switch to a slice of BBQ duck. The accompanying asparagus was dotted with little splotches of cured egg and tamarind. Absolutely astounding.

Now at this stage in a tasting menu, chefs have been known to get silly. When you've had just about enough food, and fancy something light and slightly sweet, they often go off on one with a pre-dessert. And I swear that in at least one place I've had a pre-pre-dessert. It's not big and it's not clever. So they don't do that 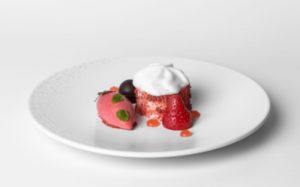 here. Instead the oohs and aahs reach a crescendo involving a combination of strawberry, tonka, yuzu and chocolate. That's it, and you've had more than enough. Even a few days afterwards, I have to pause at the keyboard at this point to calm down. Wow.

The affable Mr Banks came over to chat. He is the most laid back chef I have ever encountered at the end of a busy shift. Haar, he tells me, is no more, but the highly successful Haar at Home which delivers throughout the UK from a base in Perth will remain. By way of relaxation Dean goes out on the lobster boat a couple of times a week. Never mind farm to fork, this is creel to Caley. Do I need to consult my book of superlatives to ram home my message? No - just look at the score. Then look at your diary - you know what I'm going to advise you to do next. At these prices it may not be a weekly treat, but my counsel is, go sooner rather than later.