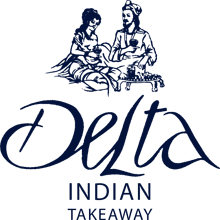 While this column may be influenced by all manner of external factors - the weather, say, or a snippet in an obscure publication, it does its best to fight obvious trends. Thus in all the time restaurants were closed, no takeaway food was reviewed in this column: indeed, up to today, I don't think it ever has been. Well, let no one accuse us of inflexibility. A visit by an offspring provided just the excuse. R, the eldest, lives in Prague, a city of great beauty with an equally great paucity of Indian food.

The Delta is an establishment in its late 20s. Situated more or less at the bottom of my street, it is the nearest thing I have to a regular takeaway, if three or four times a year counts as regular. In more normal times the routine would be a stroll down the road, place the order, then repair to the nearby Roseburn Bar for a quick one. Not feasible on a Saturday night just now, as the pub gets full pretty quickly, and anyway there was a cup final to watch at home. A more conventional phone call and collection, then.

It's obviously a different discipline, reviewing takeaway food. I have laughed at others who have scored food consumed at home under the heading Ambience. How, then, am I to deal with my standard heading of Service? That's actually quite simple. Telephone manner, welcome when you arrive, do they get things right, promptness, etc. The people who run the Delta are and always have been lovely. The front line now is being passed to the younger generation, but it remains, I think, a family affair.

This visit, however, was fraught with concern. Not to put to fine a point upon it, their jaiket, if not their naan, was on a shoogly nail. The last couple of times we sampled their wares, the salt content was so high as to make some dishes barely edible. After 25 years of sterling service some leeway has to be given, though. I mentioned this when I phoned, and was impressed by the solicitous response, with a promise to speak to chef. (Now doing that half an hour before collection isn't likely to make much difference. All Indian restaurants have vats of base sauces from which other dishes are created. If they're over salted, you're well and truly mongoosed; however, it was good of her to pretend.) 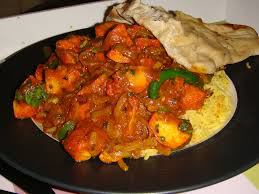 For a fairly modest outlay, a gargantuan feast was collected. In addition to the ordered dishes there was a cornucopia of salads, sauces and pickles. All tasty, if unremarkable. At the insistence of R, we ordered some starters, Sabzi (vegetarian) Pakora and Sabzi Kofta. Even with a sit in meal in an Indian place it can be difficult to get food which has been very freshly fried: when one delays collection until the final whistle of Chelsea v Arsenal, one's expectations can't be too high. The pakora were fine, but I'm not sure I would have rated the kofta even when fresh out of the fryer.

Mains were much better. A Chicken Pasanda is a dish which is always a little bland for me, but this was a good example, a hint of almond coming through the creamy sauce. Panir is an unmelting cheese made by curdling milk with a fruit- or vegetable-derived acid, such as lemon juice. (Although it's a dairy product, it's remarkably similar to tofu - see this week's On The Side column.) Mater Panir is a curry with peas: this one was pronounced as pretty good, but not the best ever. Our house standard curry is Lamb Rogan Josh - I never but never go past it. I have discovered on trips to India and through research in cook books, that the Delta's version bears little resemblance to that Kashmiri classic, but it's a very fine thing. I can report that the kitchen has got its mojo back, and the nail is now well secured once more.

Being greedy, there were sides. I never order naan bread as a takeaway for the same reasons given regarding the pakora. It just doesn't keep long once it's out of the tandoor. (As an incidental, if you have ever been in a professional Indian kitchen and observed life, limb and eyebrows being risked for each and every naan, you would have a lot more respect. It's cooked on the side of the oven at temperatures but a few degrees lower than the surface of the sun.) The pilau rice, on the other hand, was well worth it. In some unscrupulous places, they will simply dye some rice with turmeric or the like: this version is properly but discreetly spiced. Sag Alo (I used to know it as aloo - no idea when it lost the second o) is another favourite, with spinach and potato. It must be tricky to do in bulk, as it can catch if you're not careful. Ours was perfect, and quite spicy, as ever.

The three of us filled our boots to bursting. Enough was left over for Dad to sneak some cold at breakfast time, and for a full lunch for daughter. Thanks, Delta. Now, even though I can go to conventional restaurants, I'll be back again soon.