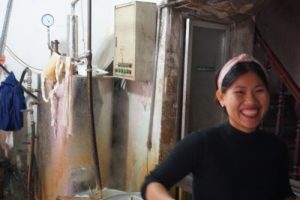 1 September is National Tofu Day. Time to celebrate? No, I'm not a fan of the stuff either. But it does give me an excuse to write about my first hand experience of making the stuff. Well, almost first hand.

It was our first full day in Vietnam, and also the first day of 2020. Our eastern foodie tour is scheduled to begin with a cookery course with Masterchef finalist Vu Ngoc Ai. As is customary, the course begins with  trip round the market. Having now visited south east Asia a few times, L and I are getting better at recognising ingredients which would have mystified us 15 years ago. I don't know what we're going to make, but my heart sinks a little when I hear Ai utter the word tofu. Spirits rise again when I realise we're not going to be cooking with it, but going to see it made somewhere nearby in Hanoi. 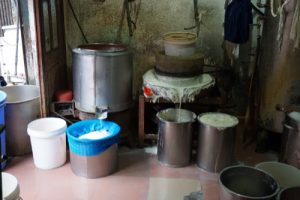 At this point I should tell you we were escorted down the narrowest of backstreets to an evil smelling room  where an ancient crone with only two teeth in her head sat stirring some vile brew. And I complain about other people and their stereotypes. As you will see from the photos, Than Tam is quite disconcertingly glamorous  - and that's her in working clothes six hours into her shift. The premises were a standard market space, but instead of the ground floor area being full of stock, it had the maker's equipment.

The process is remarkably similar to cheese making, with an extra dimension. Tofu, in case you didn't know, is made from soya, so it all begins with the beans. These have to be soaked in water to soften them and remove the skins. They are then milled twice to separate  the solids from the liquid - the "milk". I believe the solid stuff is sold for animal feed. 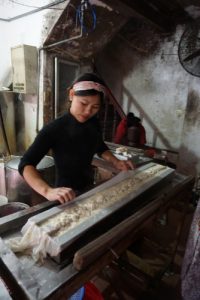 Now the fun can begin. Boil your soy milk for about 15 - 20 minutes and add salt. That gives the finished product its rubbery texture - I'm really selling this to you, aren't I? The next stage is an acid coagulant to separate what we may as well refer to as the curds from the whey. In many countries this may be vinegar, lemon juice or Epsom salts. Vietnamese tofu is different, I am told, because they reserve some whey from a previous batch, allow it to acidify for 1 to 3 days, and use that. Purists may tell you that this is a good thing, as it preserves the earthy flavour of the soy.

Anyway in the twinkling of an eye, Than Tam has ladled the mixture into what looks like cheesecloth - more accurately tofucloth, I suppose. This goes into a mould which gently presses it to remove any extraneous liquid. Another expert whoosh, and the cloth is gone, leaving just a block of the freshest tofu. Than Tam's husband appears, the front stall is stocked, and the day's business begins. 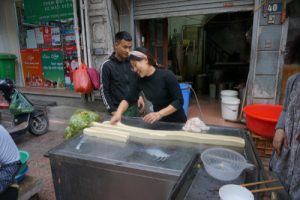