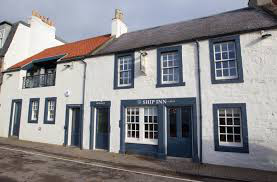 There is nothing to suggest that the first two or three days of the maiden voyage of the RMS Titanic were anything less than delightful. She was designed to be one of the most luxurious vessels of her day. The facilities, the food and the entertainment met the exacting standards of the world's wealthiest who made up a large part of the passenger list.

During a short break in Elie, in the rightly celebrated East Neuk of Fife, our first visit to The Ship was perfectly fine. Hake with a spicy chickpea stew and a chicken Caesar salad both got the thumbs up. The latter had good chunky croutons and crispy chicken skin for texture, although the taste of anchovy was undetectable. Good stuff, but you can't produce a review on the basis of two dishes.

I discover I had written about The Ship a few years ago, but had got it into my head that it had changed hands since. I was mistaken. It is still in the ownership of Graham and Rachel Bucknall. Their company, The TBC Pub Company Ltd, also owns the Bridge Inn at Ratho. It is no exaggeration to describe both these pubs as iconic. The Bridge Inn is on the Union Canal and has, or had, its own narrow boat. Both places have won Pub of the Year awards. The Ship's USPs include the wonderful outdoor terrace across the road, and the beach cricket. No shrinking violets, the Ship Inn XI  have in their time hosted the Scottish Saltires, the MCC and the West Indies touring Test team. If the sun shines, there is surely no finer place to spend a Sunday afternoon. The village is a perpetual delight, the pace of change slow. One new feature which we discovered on this trip is the establishment, by some brave local ladies, of a wild swimming group. They named their organisation the Elie Blue Tits Swimming Club. (I'm not making this up - see the photo of their HQ on the left.) 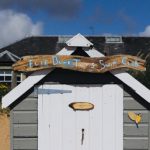 Back at The Ship you can enjoy their bar menu on the terrace or downstairs. We were interested in what the restaurant had to offer. We went back a few days later for dinner with J and D. We are accustomed by now to the difficulties which licensed premises are having because of COVID, and how they are implementing their own risk assessments. For many, good ventilation is important. Unfortunately we were placed at a west facing window with a stiffish westerly breeze coming off the Forth resulting in an unpleasant draught whistling in our faces. They wouldn't let us close it - fair enough, I suppose - but nor would they close the curtain, which would still have allowed air into the premises but not directly at us. I suppose risk assessments themselves have to be reviewed. If the open window policy is to persist in colder weather they may have to lose a table or two. No one should be expected to endure those conditions. (When they weren't looking we stuffed our jackets in front of it.)

There is a well put together menu with six starters and eight mains. Vegetarians and vegans alike are well catered for. On the night of our visit there was a special which caught our eye, buffalo mozzarella with Parma ham and nourrit peaches. (Jules Nourrit is a fruit wholesaler based in the Rhone valley. I believe it was he who first produced the peaches which bear his name. They have a red flecked flesh and are sometimes known as blood peaches.) You don't put a dish on as a special unless you have all the ingredients in prime condition, right? Sadly, no one told chef that. The cheese and the prosciutto were unremarkable. One cannot say the same of the fruit. I dread to think how many kitchen knives were blunted cutting them into segments, and you certainly needed your own teeth to get through them. Having a good crunch is a fine attribute for an apple, but not for a peach. Serving a dish with a key ingredient in this condition is a bad, and at £10.50, an expensive joke. 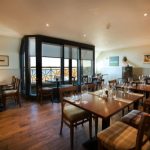 Three of us had starters. Two of us had the jawbreaker: D's Cullen Skink was pretty good. It all took a while to arrive, but it was Friday night and the place was hotching. Plates were cleared and we waited. And waited and waited. J, who had passed on starters, received his first morsel of food one hour and twenty minutes after we were seated. His fish and chips seemed to have sat at the pass for a good part of that time. Lukewarm fish of indifferent quality with sad and soggy batter came with chips which were more chilled than we were. A rib eye steak was certainly well rested. It wasn't quite cooked as ordered, but it was under rather than over, so that was OK. It came with a peppercorn sauce rather than the Béarnaise which had been ordered. The replacement arrived promptly, a mayonnaise like consistency piled up in a little side dish. I would lay good money that it had been spooned out of a jar. The advertised "hearty salad" was a heap of lettuce and cold green beans unadorned with any type of dressing at all, and the chips were cool and flabby. In fairness, the waitress offered me a new plateful; however, I was by then assuming J's usual mantle of the curmudgeon, and just wanted to get it over with. History and fairness should record that it was a very tasty piece of meat, properly seasoned, and that the chicken Caesar was almost of the same quality as on our first visit.

That, incidentally, was four days earlier. We all know what became of the Titanic four days into her maiden voyage. Sadly this meal wasn't a dinner -  it was a Ship wreck.