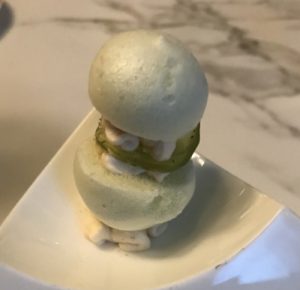 So what's the coolest cooking you've ever seen? Ironically, it might have been at one of these trendy London places where everything is cooked over fire by leather apronned, big bearded guys, cooking large chunks of protein over open flames. Or perhaps a barbie in the West Indies, where well marinaded chicken is seared as the sun goes down in picture postcard perfection? Or maybe you have your own image - please feel free to share.

But I will trump all your offerings. Come with me to Finnieston, to Glasgow's latest Michelin starred joint. We're well accustomed to open kitchens, where you can peer through the pass to watch the chefs. But I guarantee you will never have seen anything like this. The cooking area is in the dining room itself, five paces from our table, not much bigger than the desk of a look-how-important-I-am lawyer. Chef Graeme Cheevers is standing there, having what looks like a private chat with a couple of other blokes. Wait a minute, you say. Surely this is just a front. There must be a huge brigade behind the scenes, doing all the grunt work. But then you notice a Japanese Konro grill in the middle, and someone doing a lot of basting in a hot frying pan. But all being done at the volume of a furtive exchange in a ferociously governed library, and, ostensibly, at walking pace.

This, in summary, is a serious place of work. With, it must be added, serious kit. I believe the kitchen was made to measure. Not a food aroma to be detected, despite the aforesaid BBQ, the smoke being wheeched away by a state of the art, noiseless extraction system.

I don't advertise my arrival anywhere. Not that it would matter, as nobody knows who I am. With a couple of exceptions. I have met Graeme once, and did feature him on Chef Watch recently. I also quite recently bumped into Michael, his business partner and a sometime client of mine. I didn't tell them I was coming, but the best table in the house and the free champagne on arrival would suggest the name had been spotted.

I was braced for a tasting menu. Readers will know that for me these are not up there with brown paper packages tied up with strings, so I was delighted to see an a la carte option. In fairness I'm sure that here a selection of tasting dishes would have been introduced with some style and minimal naffness by Graeme's brilliant brigade. First to make our acquaintance was the lovely Veronika. I scored maximum bonus points by correctly guessing she was from the Czech Republic. Then there were two terrific besuited gents. Machine Gun Stuart from County Armagh (the title is from his speed of speech, nothing more sinister) and Callum, he of the bookie's runner suit and large pot of caviar. Stars both. 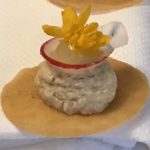 There are amuse-bouches by the dozen, my favourites being a wondrous concoction with whipped chicken livers, and a breathtaking green savoury meringue filled, inter alia, with cucumber. It tastes infinitely better than I'm making it sound.

The a la carte lines up in 3:3:3 formation, plus cheese. Unusually the cheese attracts no supplement here, though it will add £15 to your tasting menu bill. Even more unusually I pass on a crab starter. Served with a black truffle custard, it was crabby and truffly and, I suppose, custardy. What's not to like? The rest of us were beguiled by the prospect of Kilbrannan Langoustine and N25 Kaluga caviar, despite their advertised companions of rhubarb, fennel, sansho pepper and smoked butter.  A combination of fennel and rhubarb may sound odd, but the harsh edge was taken off the fennel. It took on almost a sweetness. This could make an amazing side dish. No surprise to find that the langoustines were of the highest quality. From, apparently, the stretch of water which separates the Kintyre peninsula from Arran. And yes, of course we asked Callum about N25. It's a German company, producing caviar used by some of the world's top chefs. 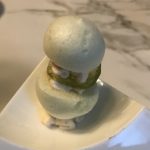 Monkfish came with barbecued leeks, identical little cylinders lightly charred, Jersey Royals and oyster cream. A classical combo with the less than classical addition of furikake, a Japanese seasoning made of sesame, miso and bonito flakes. Probably the dish of the night, definitely hitting the wow button. There is no stinting on ingredients here. Turbot, reckoned by many to be the king of fish, was roasted and came with violet artichokes. The menu mentions Comté, walnut condiment and vin jaune sauce. I have to say that this place is a reviewer's nightmare in that the saucing is of such incredible subtlety that it would have been impossible to guess half of the ingredients. Similarly the seasoning of the Anjou pigeon was tricky to identify. There was some mint and something else. Beautifully rare breast meat (served pinker than I would dare) shared a plate with what looked like a large dollop of tomato ketchup. I'm guessing this was made from the advertised beetroot. I'm not sure where the kumquat came in. Finally, maitake is the mushroom which we would know as hen of the woods.

Then they comped us another course. The biggest scallop I've ever seen had a sauce made with finger lime and smoked mussels. Graeme referred to it in his Chef Watch column in March, but this example was topped with trout roe.

All seasonal menus are featuring Yorkshire forced rhubarb at the moment*, but few have the skill to deal with it as Graeme does, even though yoghurt and ginger are classical companions. Chocolate, blackcurrant cream, pistachio ice cream. Need I say more?

Because of their busy schedules I don't often get to see middle daughter K and her other half L. If I were to bribe them with treats like this, I think the frequency of our meetings would increase. And chef Graeme? For a man of his genius, he is self effacing about his talent. But he does run the coolest service I've ever seen.

*Remember that these reviews are usually published a few weeks on.