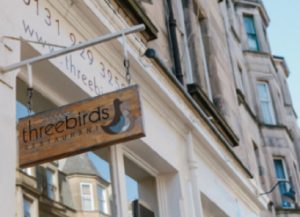 Birds do it, bees do it
Even educated fleas do it
Let's do it, let's fall in love

Nearly a decade has elapsed since three birds opened its door to its very small space in Bruntsfield. By the time Tom Eats! got round to visiting, it was well established as a neighbourhood bistro. It was packed to the gunwales with cheery folk who were clearly regulars, attracted not only by the atmosphere, but by food which was eclectic, a little out of the ordinary, and terrific value for money. You know how much store I set by first impressions. In my review five years ago I wrote, one instinctively knows when something is right.

At that time, I assumed from the name that the business had been set up by three ladies. (I have never been able to ascertain the ownership: if anyone knows, please tell me.) Their next venture, Apiary, was a slightly larger operation in Newington, on the south side of the city. In my review I made some very witty (well, so I thought at the time) comments about the birds and the bees, and scored it a very creditable 19/25. And if you’re wondering about the Cole Porter lyrics at the top, the next link in their chain is educated flea in Broughton Street. For some reason I’ve never got round to visiting. All three are closed just now, obviously, but are offering a takeaway service, threebirdsonthefly, all from the Bruntsfield operation. I was delighted to hear that my good friend and erstwhile neighbour, Fiona Garwood, had sampled the wares, and even happier when she offered me her appraisal. Over to Fiona.

We had enthusiastic recommendations for three birds from the lovely couple who bought our house last September. Four weeks into January and after nearly three months of home cooking, we decided to try their Saturday evening takeaway menu.

The starters selection is fairly short. Two of the choices are really snacks. We selected the Veggie Mezze for 2. This contained dukkah smoked shallots vinaigrette; rose harissa & basil hummus; and soy braised aubergine, red peppers with noodle salad & Asian dressing.  In addition there were pickles and olives, feta & pistachio dip AND tortilla dipping chips, all for £15.

Our favourites were the rose harissa & basil hummus, and the feta & pistachio dip. We attacked the containers with our tortilla dipping chips, then spread the remains on bread the next day. Very tasty and delicately flavoured. 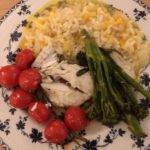 From a choice of six mains we ordered chicken breast vichyssoise with bacon, roast carrots, mange tout and baby potatoes and seabass fillet, with squash risotto, roasted tomatoes & garlic tenderstem broccoli. There is a range of eight sides, which you don’t need. The helpings were so generous that we had enough for dinner and then 2 lunches.

In the Afters section, aside from ice cream or sorbet, there was a choice of three, plus cheese. Sensibly, rather than selling the ice cream in teeny portions, it comes in litre containers. We opted for the sea-salt & honey ice cream, knowing that we could keep it in the freezer to enjoy later.

You can collect the order at an appointed time on a Friday or Saturday, or pay extra to have it delivered. We went at 12.45 and there were at least 40 other orders waiting to be collected. The food was packaged in airtight containers and labelled, though I couldn’t read all the writing.  I had to check the menu on line to remind me what we’d ordered. The reheating instructions were all on the restaurant website and easy to follow. The menu changes every week.

For all that food, the self collection bill was £45.00, which we thought was extremely good value. Not only great value, but great food. I know takeaways aren’t getting Tom’s usual scoring system, but the best of the dishes were getting 8 and 9/10 from us. Let’s hope the restaurant and its sisters will survive to reopen when restrictions lift.

Fiona Garwood is a very dear friend, who has been a great supporter of Tom's Food! from the outset. Not only is she converting all her new neighbours to the delights of the site, she is a regular contributor. Her review of The Black Bull Inn at Lowick was one of the year's best read articles. Many thanks to Fiona, yet again.