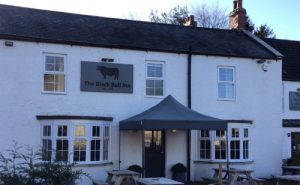 There are several pubs in this area called The Black Bull, but, for us, there’s only one Black Bull: the one in Lowick, less than 2 miles from our static caravan at Barmoor Castle Country Park.

It’s a village pub, dating back to 1817, with 10 comfortable rooms, excellent food, friendly service and a welcoming bar. On our first visit, on a winter Saturday afternoon in 2019, locals were enjoying a few drinks while watching Scotland v England contest the Calcutta Cup at Twickenham, the memorable 38-38 draw. We were greeted warmly and no hard feelings!

We have stayed there a few times and eaten several good dinners, so we were disappointed that it didn’t reopen in the summer after the first lockdown, along with other places. Little did we know what was to come. The high standards have continued under new ownership, The Black Bull Management Services Ltd, spearheaded by locally based young entrepreneur, Hendrik von Boeckel.

The first time we met Hendrik, he loomed over our table to apologise for the delay in our main course - they were extremely busy, with all tables taken (socially distanced of course).  He was charming and 2 complimentary glasses of wine quickly appeared at our table. The food, when it came, was hot and delicious. A few days later he delivered some hand picked sloes to us, so we could make sloe gin - a firm favourite in the Garwood household.This review is from Wednesday 4 November, the last evening meal service before the second lockdown in England. Despite this, the food and service were of the usual high standard. Several tables were taken but it wasn’t full.

For starters we shared the Salad of Local Pigeon Breast, with Chorizo, Black Pudding, Croutons with Smoked Garlic Dressing. In fact we had two breasts and grilled flat bread, rather than croutons. The pigeon breasts were on the pink side, but that is the preferred house style. (Quite right, too - Ed.) All the game is served this way, according to Hendrik, who prides himself on the “hill to table” service, with locally produced  game, often shot by himself. The dressing was tasty and generous. Sometimes, with shared starters, one or other of us mops up the lion’s share, but there was plenty this time.

For the main course, I chose the Chargrilled Venison Fillet, with Crispy Parma Ham, Asparagus, Parmentier Potatoes, Honey Roasted Carrots & a Wholegrain Mustard Sauce. Again, it was on the pink side and delicious. The portion was just right for me, as venison can be rather filling. There was plenty of the sauce, which suits me, as I often have to ask for more. I could have scooped up the remaining sauce with a teaspoon. Vegetables were nicely cooked.

R decided on the Seafood Platter, main course size, consisting of Peppered Mackerel, Duo of Salmon, Fish Goujons, Spiced Mango Mayonnaise & Sweet Potato Fries. The fish was good, he said. It came from Hodgsons, a major fish supplier, based in Hartlepool, sadly not available in Berwick. It was nicely presented, but the batter was on the heavy side for him and the portion over generous.

We compared notes with our social distanced dining neighbours. She had opted for the starter size Fish Platter as a main course, based on experience and we think she was right. He had a tasty beef and ale Handcrafted Pie from the Jarvis Pickle Kitchen, Eyemouth, one of several pies on the menu.

To desserts. I had room for the Poached Comice Pear with Almond Praline & Clotted Cream. I asked for an alternative to the clotted cream and was served with natural yogurt, which suited me. R still found room for a scoop of raspberry ice cream, one of the 14 flavours on offer.

Many thanks to Fiona Garwood for this review. Fiona will be known to many of you as 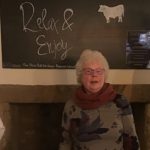 neighbour, street party organiser, gourmet and wit. She is currently between houses, lodging in her static caravan which is near Lowick, just south of Berwick