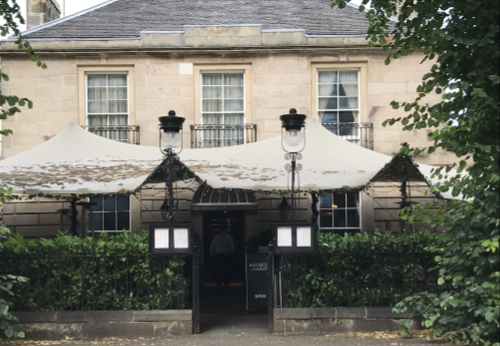 In life, sadly, there are winners and losers. The good news this day is that I was one of the winners; the bad is that daughter and partner fell into the other camp.

TN, my youngest, and her Liverpudlian partner HC had travelled north to visit ageing relatives. A flying visit to Johnston Towers was intended to be just 24 hours, setting off the following morning. The car, however, had been acting up. Maybe just wheel tracking? A visit to our friendly local KwikFit was sombre. Horrible things with brakes partly jammed, and badly corroded. (This from a car which had passed its MOT the previous week.) An estimate of 800 quid was taken on the chin, as was the news that it wouldn't be ready till 4 the following day.

The good news? It meant they had to stay for lunch. Definitely our gain. We had a sunny stroll down the river to Stockbridge. As you come off the Water of Leith walkway towards the bridge, you have on your left the glorious streets of Georgian flats leading up to Ann Street, considered by some to be the pearl of the New Town. All of this was land inherited by a lady known as Ann of Deanhaugh, a fortune which she brought to her marriage to Henry Raeburn, who went on to do much of the development.

Stockbridge has had an up and down history. The mid 20th century saw it very down at heel, positively slummy in parts. It has been going up steadily ever since, now home to some interesting shops and eating places. At the far end from the bridge you have Raeburn Place, name of both the street and the sports ground. The latter is site of the first ever rugby international match, between Scotland and England in 1872. (Scotland won 1-0 - no I don't know how the scoring worked then, either.) Next door stands the Raeburn Hotel.

It's a very lovely building, erected as a private mansion in 1832, nine years after Raeburn's death. It was originally known as Somerset Cottage. Ha! some cottage. It has been very sympathetically extended. Truth be told it's a bit of a warren with the main bar, library, garden room and club room, plus a large patio at the front. This is a mecca in good weather. With current restrictions (the visit was in June), the owners have had the good sense to erect a sturdy awning. 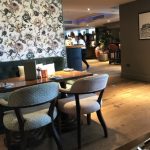 Even with social distancing they can hold a goodly crowd, and it was busy when we arrived at 12.15. Staff are young and smiley, but a little basic training wouldn't go amiss. Variables on the menu were soup of the day and fish of the day. You can work out the Frequently Asked Questions, can't you? In our case the third is, does the soup have cream in it? I think three separate visits to the kitchen were required, but perhaps it was only two. My other bugbear were the tables on three tiered pedestals the size of a small wedding cake. Do you put your feet on top, raising knees to strange levels? Do you try to straddle them? Difficult enough for a man, most inelegant for a lady. Or do you tuck the feet well under the chair? In my case, b****y uncomfortable.

To the food. It's a nice looking menu. Undemanding and full of crowd pleasers. I'd popped in here many a time for a drink, but never for food. Dining tables were always full of people making contented noises. Three soups came to the table. (After watching the famous Victoria Wood sketch, will anyone ever order two soups again?) The day's special, sweet potato and paprika, plus a brace of Cullen Skinks. The latter was a first for the Liverpudlian HC, who was impressed. The soup came with the advertised sourdough, but we had to chase them for the butter. I think it's the first time I've seen oysters offered in threes (£8). Just the right amount for a light lunch starter.

Mains were of a sufficient size to keep passing rugby players happy. The boy from the 'Pool enhanced his Scottish credentials by adding haggis to his Buffalo Chicken Burger. Good but the sauce on the side was a little odd. A Caesar Salad was huge and the amount of chicken was remarkable for an extra cost of just £3.50. A plate entitled George Bower Smoked Ham (George Bower's being the celebrated butcher across the road) came with two fried duck eggs, chips and home made piccalilli. The latter was pleasant enough, if unlike most conventional forms. A word on the chips/fries - always a good test of a restaurant. Skinny fries - hmm. Chips - while I don't think they were home made, they were crunchy on the outside and fluffy in the middle. That's a tick from me. Finally, the day's fish, sea bass with panzanella salad. A properly cooked fillet of fish, skin suitably crispy, was on top of a large bowl. This salad is traditionally made with stale bread in countries where they have good tomatoes, whose juices bring the bread back to life. Here they used croutons. They managed the miracle of sourcing tomatoes, red and green, which boasted both texture and flavour. Some marinated red onions, a vinaigrette and a little basil (I could have done with more) completed a very tasty combination.

This isn't a food destination, but it's not promoting itself as such. It's all day dining, serving tasty meals in very pleasant surroundings. I should, however, say that we all four needed water when we got home. Salt police in the kitchen, perhaps? Oh, and please train your lovely staff a little - you lose a point for that.

Dean Banks (Dean Banks at The Pompadour, Haar at Home) tells me that he has found a new location for the original St Andrews based Haar, and that he plans to reopen in in October. Dean will feature soon in the Chef Watch column. Watch this space.