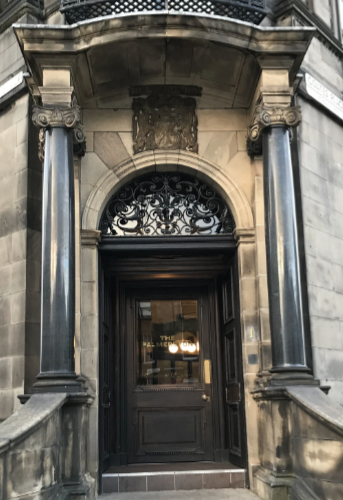 If you want to know where to find truly great food in Edinburgh, just memorise any one of the preceding six phrases.

I would like to take credit for discovering this place, but I think that must go the Retired Captain of Industry. Whenever he and I venture forth to do research for this column, we always seem to strike gold. Left Field, The Little Chartroom. I rest my case. 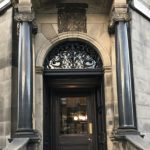 A Restaurant That Used To Be A Bank. Fancy!

It's not that long since chef Lloyd Morse and front of house James Snowden opened their doors just west of the city centre, but a packed house on a dreich Thursday lunchtime tells its own story. Like a huge number of city centre licensed premises they are situated in a former bank, though in its previous incarnation this was a coffee shop. Echoing that, they do open from 0900 for coffee and pastries, but save your stomach space for the main event.

As you enter, you are greeted with an impressive array of breads, their immaculate sourdough loaves rubbing my nose in my own recent failure (see An Ignoramus Tries Sourdough in a recent Tom Cooks!). Pretty soon we get to sample them. The fact that it is simply the finest sourdough bread I have ever eaten sets the standard for what is to come. Even the RCI was impressed, and his household produces two loaves of the stuff every week.

The menu is sensibly compact - 5 starters and 6 mains - and is proof of their claim to be passionate about the origin of their ingredients. Salt beef from Luing in Argyll; Jacob sheep; and St Tola, a goat's cheese from County Clare. And being wise in their choice of ingredients also allows them to charge prices which are astonishing value for money. Shoulder of mutton, for example, as opposed to leg, and hake and gurnard instead of sole.

The sourcing of the ingredients aside, there is nothing in the bill of fare to alert you to the excellence to come. The starters include a terrine and a spaghetti dish. Hardly radical, you might think. But the terrine is made from Tamworth pork, solidly meaty but still moist. There's an unusual spicing, cloves I think, picking up perfectly on the accompanying spiced pears which had a little bit of a kick to them. The RCI's Italian roots make him a pasta expert. His spaghetti came with mussels, tomatoes and parsley. We were both hollering for extra bread to avoid missing out on a single drop of a truly exceptional sauce.

Rereading the bill, I've just noticed that they don't charge for the bread, and the very lovely Aisling (hope I'm spelling her name correctly) was happy to replenish stocks on request. I learn later that she is James's cousin. If I had family members who were producing food like this, I'd want to get involved too.

The Jacob's sheep shoulder involved a slow cook, obviously enough. Delicious though this cut is, it can be a little fatty. Not here. The meat had obviously been carefully prepped, with just the right amount of fat left on for flavour. A hunk of pumpkin and some black cabbage were part of our five a day, and a handful of salty black olives added to the balance. You may well ask why our resident Italian expert was choosing ragù, a lamb version with polenta. His home version is a thing of loveliness, and I make a pretty fine specimen myself. Well, there's pretty fine and there's lovely; then there is jaw-droppingly fabulous. To take some dishes which many home cooks will have produced at some time and to elevate them to such heights is reminiscent of the late Gary Rhodes in his prime.

Praise can't come much higher than that. I'll sign off now, but I'll be back.