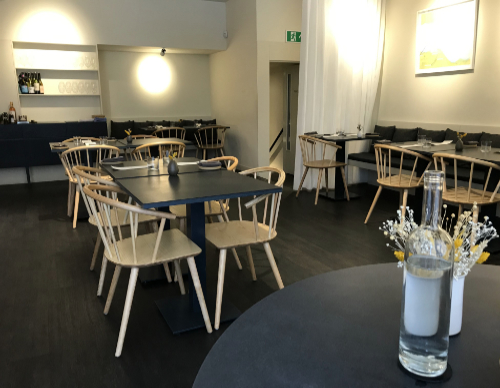 You'll know it even if you don't have the Greek. In the beginning was the...

Probably most of you are nodding and saying, word. These days that seems to be the most common translation of λόγος (logos). We discussed this quite a bit in our Greek classes in the 1990s. (I'm not being facetious. I'd be willing to bet that my small law firm in Fife was alone in having a Post Qualifying Education class in classical Greek.) Sandy Baxter, colleague, class teacher and classicist extraordinaire, preferred the definition proposed by his university professor, in the beginning was the creative intelligence. Hold that thought - it's not as irrelevant as you might think. 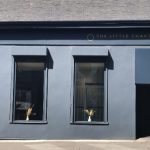 Opening any new restaurant is a logistical nightmare. But let's say you're a chef of international renown, Roberta Hall, say. Your initial, 14 cover restaurant The Little Chartroom has wowed public and critics alike. You are twice a finalist in the Great British Menu. The world awaits the reincarnation of your restaurant in larger premises, formerly occupied by Martin Wishart's cook school. With a pizza place, say, or a steak joint, not much imagination is required. But, boy oh boy, in this case the world is expecting a menu packed with creativity and intelligence.

And, goodness me, how Roberta and husband Sean have delivered. The new version of TLC opened in the autumn of last year. I was an early patron of Mark 1, in Albert Place a section of Edinburgh's Leith Walk. Considerately I decided to give them a month to settle in before gracing them with my custom. Going online to book a few weeks after they opened, the earliest available table was five months hence. Crikey. 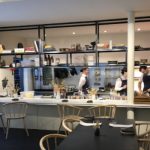 I eventually secured a lunchtime slot for my birthday. The sun shone, and we were feeling very smug after a four mile walk down the Water of Leith. The dining room is simple and elegant, with an open plan kitchen. The only decoration, apart from shelves of cook books (the ones with recipes that are too difficult for me) is the set of charts which inspired the name. There are about 30 covers, so I guess the name is still OK. The Medium Sized Chartroom  just doesn't have the same ring. Nine or ten staff on display, compared with a total of four (including the owners) at the last place.

Let me tell you that welcomes just don't get better than this. No sign of either Roberta or Sean. I gather they have a new baby. Allow me to reassure you during the sleepless nights: the place runs like clockwork in your absence. In no time at all we have a drink, some bread, and an awful lot of smiles for us to return. We are first in. The kitchen is finishing prep, and carries on in the same calm manner throughout service. Clockwork is completely the wrong word: these chefs operate as I imagine a Rolls Royce engine to run - smoothly, silently, with maximum efficiency.

You all know about L and the cream allergy. Visiting Albert Place just after it opened, we were almost reduced to tears when Sean said, we're sorry that the fish pate has cream in it, so we made a batch without in case you fancy it. Words seldom fail me. This time, they went one better. L received an entirely separate menu, with small tweaks made to the relevant dishes.

I correctly guessed that crab anolini were stuffed pasta. Originally from Parma, these thumbnail sized beauties were stuffed with an exquisite crab mixture and finished with a precision that would have won approval from even the fiercest Italian nonna. They came with tomatoes and a clear broth based on tomato water, subtly enhanced. But hold on. The menu says Thermidor. How does that work? Well, seconds later the lovely Lucille (from near Nice in case you were wondering) arrived with a large sourdough soldier which had been slathered in a thermidor sauce. I could have eaten a basket of these, though after some excellent sourdough, and treacle soda bread, it wouldn't have been wise. Lucile tells me that there is a weekly competition based on how many of a particular menu item have been made.

Elderflower is not an unusual ingredient in kitchens of quality at this time of year, but which creative genius had the idea of using it to flavour butter as a sauce for a chunk of cod with peas? The cod was cooked half a minute under, which, though common these days, is not to my taste. On the side, a generous plate of Jersey Royals. I couldn't for the life of me place the black gloop around them. Over to Lucille. This is a minimal waste kitchen. The pea pods had been combined with nori seaweed, to remarkable effect. The non cream eater had basically the same dish, a pea purée and tenderstem broccoli substituted for the butter and peas.

You can't have a July birthday and not have strawberries. Everybody knows that. It's the law. Well the kitchen obliged with a dish described as Strawberry, buttermilk, brown butter cake, burnt honey. Except it was just so much more. A cake, which was initially rather solid, came on a bed of ever so lightly poached berries, a butter milk ice cream and a jagged sliver of crunchy honey. There was a coulis underneath and an intriguing trickle of something savoury and  green. Back to Lucille - that girl knows everything. OMG! Who on earth came up with the idea of sweet cicely in a dessert like this? A creative genius.

Remarkable stuff. Upsizing in the current climate with staff shortages and the like really can't be easy. I guess that if you look after your staff - a four day working week - allow them to produce food of this quality, and engender what's obviously a happy working environment, you're well on the way. Congratulations to Roberta and Sean. Best wishes to you and to the new arrival. To the rest of you I say, book now for a table around Christmas time. 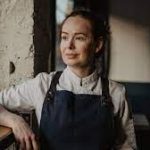 PS. News has just reached Tom's Food! that Roberta has been included in the 100 Most Influential Women in Hospitality list just published by CODE Hospitality. Congratulations.

The Tollhouse, the latest project for Stuart Muir and Paul Brennan of Dine fame is approaching completion. Just down from the clock at Edinburgh's Canonmills, the development has been plagued with problems. Tom's Food! has had two sneak previews, one this week. To call the place state of the art is like saying that the steam engine made a wee bit of a difference to the world. To find out more and to register an interest, see their website.

The less welcome news is the announcement that The Ubiquitous Chip, Stravaigin and Hanoi Bike Shop in Glasgow have been sold to Greene King. Maybe it'll all work out; however, Tom Eats! has experience of Greene King's track record when taking over a legendary restaurant. Read our review of the Cafe Royal Oyster Bar.