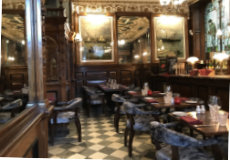 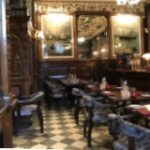 OK, all together. Da DA da da DA da... All right. Singing never was my strong point, so you're forgiven for not recognising the opening few notes of the Chariots of Fire theme. Still confused? Well take yourselves back to a romantic dinner with Harold Abrahams (played by Ben Cross) and a young lady. Most know of the connection between the West Sands of St Andrews and the film: fewer know that it also featured this, probably the most beautiful dining space in Edinburgh.

On the walls, tiles by Royal Doulton, continuing the theme from the Circle Bar next door: the windows, featuring British sportsmen, by Ballantine and Gardiner. Extraordinary to think that the building was originally designed as a showroom for gas and sanitary fittings. Victoria Plumbing, eat your heart out. While the bar has been chopped and changed a little over its 160 years, I think this place has largely remained untouched, though the food will have changed from time to time. 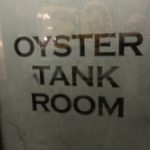 Ah, the food. Just when this review was going so well, you had to go and start asking about the food. They still have oysters. A dozen raw will set you back £23, a price which is quite reasonable by today's standards, though one which would have horrified regulars in the days when they still boasted their own oyster tank.

We lunched with the Former Brewing Giant, by coincidence a former MD of the company which now owns the Cafe Royal. He was too polite to venture many opinions, but did add that he was looking forward to this review. We'll see. The three of us had a couple of starters. Garlic prawns were OK, probably frozen, and the advertised chilli and coriander would not have been detectable in a blind tasting. Better, however, than a plate of whitebait and calamari. Whitebait are best just dusted in seasoned flour, not cocooned in bread crumbs. They at least had some flavour. The less said about the calamari the better.

To mains. A well enough cooked salmon fillet came with "truffled" macaroni cheese. Truffle hunting can indeed be difficult in February. What is less easy to explain or justify is the congealed nature of the pasta and the gluey consistency. As I write this we are awaiting the arrival of our painter. He won't be hanging wallpaper, but I might give him their number for future reference. A flavourless piece of monkfish sat atop some mussels, clams and sauté potatoes. None of these three had been cooked for the first time that day. The bottom of the bowl contained what looked like melted butter. It had an undefinable, odd taste. I left half of it. Venison proved a better choice, haunch meat served on top of a game casserole. At least the former had been cooked to order; however, chef was so proud of doing something other than reheating that he forgot to let it sit for a few minutes. First impressions were of the beast bleeding on to the plate, and needing the teeth of a carnivore more feral than L to get through it. After a few minutes it was much better - chef, that's why you have to let meat rest.

For some inexplicable reason, two portions of non crumbly apple crumble were ordered. Another strange flavour and indifferent ice cream.

Perhaps the foul weather was responsible for the fact that we were the sole diners. Or perhaps the word has spread among the cognoscenti. It takes some skill to render such a beautiful room soulless, but the expressionless waiter and the lack of heating, allied to the dire cooking, rendered this one of the more depressing meals of recent memory.