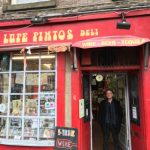 Meet Dougie Bell for the first time, and you immediately notice two things. The first is the trademark pork pie hat, worn at all times. The second is the permanent twinkle (albeit not in my truly dreadful photos.) You just know at first encounter that this has not been an ordinary life. Two of his cook books, Two Cooks and a Suitcase, and The Devil Never Licked It contain a great deal of autobiographical stuff, much of it hilarious. They are as worth reading for that as for the (excellent) range of recipes.

Learn a little more about the man, and you may wonder how a wee boy from a poor part of Greenock became one of Scotland's foremost sellers of Mexican, Spanish and American deli items. There are two branches of Lupe Pintos in Edinburgh and Glasgow, which last year celebrated their thirtieth and twentieth anniversaries respectively.

You might be surprised to learn that an early stop in the journey came in Edinburgh's Ramsay Garden, a prestigious development just down from the castle overlooking Princes Street. That was the home of diminutive godmother Aunt Dinky who, in a fortnight, introduced a teenage Dougie to kedgeree, pies, stews, curries, cakes and home made sweets. When the time came to go home it was back to a basic budget to feed six, fish fingers and Spam being staples. The culinary education had stuck. Our Dougie improved family meals no end by following the instructions on the packets.

A move to Edinburgh followed, working as a BT engineer. Income was supplemented and the love of food maintained by starting a supper club in his flat, long before such things became trendy. Guests were seated at improvised trestle tables made from planks borrowed from nearby building sites. (Don't look askance - he did take them back. That's what borrowing is. Let's just not go into minor issues such as consent.) That lasted for three years - cooking was in the DNA. 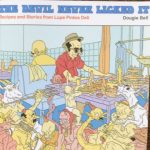 A trip to the States followed. Partner Rhoda's birthday coincided with Mexican Independence Day, celebrated with tequila and tacos. As Dougie memorably wrote in The Devil Never Licked It, As fireworks filled the cloudless skies, something happened to me. With my soul and fingers stained, my fate was sealed.

The fate was the founding of the hugely successful Pachuko Cantina in Edinburgh's Grove Street. Even at a young age, he knew well enough to apply sound business principles. Six nights a week with three sittings meant that the bank and his brother were paid off in six months. Three years on, the pair of them were knackered but had made enough to afford a year long trip to the southern USA and Mexico. There were adventures too many and varied to relate here - read the  books for more detail - including an encounter with Lupe Pintos whose name the shops bear. (It's not exactly the lady's name, but as this is a family column I'm saying no more.)

If you have a fancy to try your hand at Mexican cooking a trip here is a must. As Dougie has exclusivity agreements with many of his suppliers, you can buy a lot of stuff which you'll find nowhere else. His best sellers are chorizo (some of the best I've ever tasted) and chipotle (smoked jalapeños). More esoteric items include epazote, a herb used only in Mexican cuisine. In the shops and on the website you'll find recipes, and his four books are full of inspiration. I reproduced his chile recipe a while ago. It is the best I have ever tasted, though competitors in his occasional chile cook-off competitions would beg to differ.

The business is now in its fourth decade, but the man himself, still just turning 60, shows no signs of slowing up. If you haven't visited, get there now or order online.

Click here for the Lupe Pintos website, and to find more about Dougie's brilliant books, Two Cooks and a Suitcase, The Half Canned Cooks, The Mexican Wrestlers Cookbook and The Devil Never Licked It. More recipes will follow in Tom Cooks! on Friday.

The pressures on the beleaguered restaurant industry show no signs of abating. Getting staff to fill all types of vacancies is increasingly difficult. With shortages of supplies, ever increasing inflation and rising interest rates, the trade is facing a perfect storm. Expect to see prices rise.

Sad to see that Rollos in Stockbridge has closed its doors. Alison (fabulous, darling) was such a fixture. While the website states that it's temporarily closed, the place looks pretty well cleared out. I gather that the branch in Broughton Street is still going. We wish her all the best.

It's an insult which has been hurled at many over the years. Tom's Food! can disclose that it happened to me officially. A day's cookery class with Tom Cooks! was apparently the first prize at a charity lunch to raise funds for a statue to commemorate pioneering Edinburgh doctor Elsie Inglis. (Lord knows what the booby prize was.) To find out more about the campaign or to make a donation, click here.