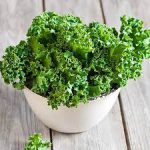 I know that some friends will be recoiling in horror at the thought of this stuff. Truth be told, cooked without care its coarse bitter leaves are pretty unpalatable, and its reputation as Scottish peasant food hasn't helped.

The original spelling in Scots was kail. It was an important staple, largely because it would grow in all conditions, including Orkney and Shetland. Among its many benefits it is rich in vitamins, particularly A and C. Useful in the 16th century for avoiding scurvy, and now, 600 years later, being hailed as a superfood.

Yet not so long ago the words kail and kailyard were used only in a pejorative sense. I inherited the phrase cauld kail het again from my mother and still use it. Kale was commonly used in eponymous soup - which improved neither its flavour or desirability - and the term literally referred to the previous day's soup reheated. Today's equivalent phrase would be same old, same old but I gather it was often used by parishioners who noticed the minister's sermon being very similar to last year's. I discovered a few others. Some are self explanatory. Thus, we could guess that to earn saut tae yer kail meant to make a living (literally, to earn salt for your kale), but I wonder how many could translate tae get yer kail through the reek? That, apparently, was to receive a severe scolding.

Kale is a member of the brassica family, but unlike the more common cabbage varieties it grows in leaf form as opposed to in a head. There are a number of types. Probably the best known one at the moment is the currently fashionable cavolo nero. The most common type is curly kale. It is known in the United States as collard greens, having moved from Scotland to southern USA as a symbol of poverty. For more on that, see Food and Racism: An Interesting Debate from July 2020.

Despite (or perhaps because of) the it's really good for you mantle, I don't think I'd ever cooked kale until Christopher Trotter's invaluable little book came out in 2015, as part of his Scottish vegetable series. Friday's Tom Cooks! will feature a couple of his dishes, but for now, the basic recipe.

If you buy kale in a supermarket the stalks will have been removed *. Some recipes will tell you to remove any coarse inner stalks but there's no need - just alter your cooking time slightly if they are thick. Take your kale and boil in salted water for about three minutes. Drain and immediately refresh (plunge in a large bowl of iced water).

When you are ready to finish it off, put some olive oil (Christopher suggests rapeseed) in a pan with a clove or two of crushed garlic. Squeeze as much water as you can from the leaves then heat through, seasoning well with salt and pepper. Half of your guests will think they're eating spinach.

*Christopher disagrees with me on this point. See below his comment and my reply, and also his advice about rapeseed oil.

CT Not just “rapeseed” but Scottish cold pressed rape seed! And I am afraid the supermarkets DO NOT remove the stalks from kale, they just chop them up (underlining my contention that supermarket buyers don’t eat real food), so you still need to tear the leaves off and then shred the stalks and cook the latter for longer.

TGJ Perhaps we are at cross purposes or it’s just that our experiences differ. Most (albeit not all) of the prepackaged kale which I buy has had the longer, leafless stalks removed. In most cases that’s leaving leaves with relatively thin centres which can be cooked at the same time as the leaves. But sometimes, as you say, you have to do the trimming.