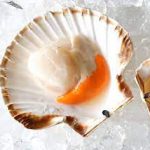 In Wednesday's Chef Watch column, Graeme Cheevers chose scallops as his favourite ingredient. He's certainly not alone in that. It's a dish I always find hard to overlook on any menu. Like many stars of Scottish produce (especially those from the sea) we've moved on a long way from how we used to (mis)treat them.

My early restaurant memories include coquilles St Jacques, so called because the scallop shell, in which the dish was traditionally served, is the emblem of St James. Wear one in your hat as you tread the Pilgrim Trail to Compostela. Sadly, cheese sauce and a thick scarf of mashed potato often masked the flavour of the star ingredient. In those days, I suppose it probably wasn't of the freshness we expect now.

How To Prepare and Sear Scallops

If you know how to do this, skip straight to the recipe. Alternatively, if you are more of a visual learner, you will find a variety of videos on You Tube. A small word of warning. While the Americans do pronounce the word  scallop correctly, their nomenclature is different. They call king scallops sea scallops, and when they talk about bay scallops, they are referring to the little ones we know as queen scallops or queenies.

While cooking anything to Michelin star standards is difficult, scallops in general are not that difficult to prepare and cook. For best results, buy them still in the shell. Do make sure you pay a little extra for hand dived ones. With a few honourable exceptions, the process of dredging causes untold damage to the sea bed and marine life in the vicinity. Use a large knife and twist to break the hinge at the base. Remove the flat shell, leaving the scallop attached to the other shell. With a very sharp knife, cut as close to the shell as possible to remove the scallop with no waste. The white part is known as the adductor muscle, which is always eaten. The other edible part is the roe, or coral. When I was writing this article it occurred to me that I have never seen a scallop without one. Surely they can't all be female, I thought. The answer is that the female has a coral which is all orange. The male has one (I don't know why)* which is partly grey.

Anyway, get rid of all the black and grey bits around, and attached to, the adductor. I don't like the texture of the coral. Much as I hate waste I tend not to use it. One fine day I'll dry it in a slow oven over night to make scallop dust, but not today.

Wash the white part well, and trim any little grey bits where the guts have been attached. If you do refrigerate, make sure you take them out of the fridge at least half an hour before. Pat them dry, otherwise they won't sear. Season on both sides with a little s & p. Heat a frying pan to quite a high heat, and add a little touch of oil. Add your scallops. Don't overcrowd them. They should sizzle as soon as they hit the surface of the pan. Don't play with them - leave until a light brown crust is formed.

Cooking time depends on size and thickness. About 2 minutes on one side then 1 on the other will suffice for an average scallop. Some add butter at the end and baste. I don't. If you haven't cooked them before, buy one more than you need and experiment. (Cook's perk.) While they need to be cooked through, a tiny bit of translucence in the middle is fine. They will continue to cook while you plate your dish. As with any fish or seafood, overcooking is a crime.

Life is full of coincidences. As I mentioned on Wednesday, after this column was started, I met Graeme Cheevers at the Master Chefs of Great Britain lunch. But there's more. The latest edition of their magazine had a feature on the man himself, including one of his recipes. Yes, you guessed it, Roasted Orkney Scallop, Cauliflower, Finger Lime and Smoked Mussel Sauce. Was it any help? Hell, no. Chefs will be chefs. And he didn't roast his scallop, he seared it. Really! (But, interestingly, Graeme suggests cooking it on one side only.) My recipe is a much more basic one.

Most recipes for cauliflower purée which I've encountered use cream. ( Graeme Cheevers doesn't but he includes an onion.) I'm featuring Christopher Trotter's recipe from Cauliflower, one of his invaluable little vegetable books. Oddly, L, my other half, can eat most dairy produce bar cream. As this one uses crème fraîche, it would no use for someone with an intolerance to the  full range of dairy, though Christopher says it is optional. Make the purée first. This recipe will make a lot more than you need for this dish.

Bring the stock to a simmer with the garlic and a good ½ tsp of salt. Add the cauliflower and cook gently until completely soft. Keep an eye on it to make sure the liquid doesn't evaporate. (Ed - Burnt cauliflower smells DISGUSTING.) Remove from the heat and allow to cool a little. Whizz in a food processor until completely smooth, stir in the cheese and season to taste. Finally, fold in the crème fraîche if using, and warm before serving.

1 - 3 scallops, depending on size. 3 medium ones make a decent starter portion; the best black pudding you can get, one piece for each scallop; cauliflower purée (see above).

Consider how you are going to do your black pudding. You want one piece per scallop, ideally of the same size. If you want to be flash, you could use a cutter, and just cut circles. Use the remainder to stuff a chicken breast, or some such. Alternatively, cook whole slices and take what you need.

Whichever way, lightly grill the black pudding so it's properly warmed through but not frazzled. Have your purée warmed. Sear the scallops (see above).

To serve, put a puddle of purée per scallop on a plate, then a piece of black pudding, with a scallop on top. To garnish, you can be as fancy as you like. Microherbs if you have them, or little cubes or slivers of apple. Graeme adds roasted cauliflower pieces, sea fennel and salty fingers, whatever they are.

*Turns out that we shouldn't really use the word roe at all. The reason why ‘roe’ is incorrect is it’s a descriptive term for the female reproductive organ; this is opposed to the ‘milt’ which is the male reproductive organ. The scallop, being a permanent hermaphrodite, has both. The things you learn when you read Tom's Food!

Thanks to Christopher Trotter for permission to reproduce his recipe. Christopher is Fife’s Food Ambassador. He has produced an invaluable series of vegetable books in addition to Cauliflower

For more information see his website. In addition to his writing and media work he runs cooking classes and workshops of all sizes and to all specifications.