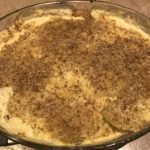 This is a homage to Portugal where I holidayed recently. The country is the world's largest consumer of salt cod. In every supermarket you'll see racks and racks of the stuff, stiff as a board, probably handy as an offensive weapon. You'll find variations wherever cod was common, Newfoundland, Norway and the Faroe Islands. It's common too in west Africa. Cod dried without salting was known as stockfish, and the forced migrations of slaves to the West Indies resulted in the Jamaican national dish of saltfish and ackee, the latter being the national fruit of the island. We'll come to where you source it in a minute.

The process is fiddly. I guess you could make this dish using smoked haddock, but it wouldn't be quite the same. Using salted cod you have, for obvious reasons, to be careful with your seasoning. I think I got it about right. This recipe is adapted from one in a book belonging to Michael G, presently resident in Olhão in the Algarve region of Portugal. Bizarrely, that recipe called for you to cut and fry the potatoes as for chips before covering with the gloop. No thanks. As they reckon the Portuguese have 1000 or so recipes using this ingredient, there are no doubt many varieties of even this one recipe.

By the purest coincidence, just after I had decided to search for the ingredients for this dish, I attended a food tasting and lunch hosted by Slow Food Scotland's Wendy Barrie. It appeared in this week's On The Side. The first course served was - salt cod. The fish was from Shetland. Keen to support Scottish producers, I found their website. My enthusiasm waned when I discovered that the price, before delivery charge, of 80g of the stuff was £8.30. Now we all have a living to make, but that equates to £103.75 a kilo. (In fairness, I've just discovered that a 250g pack is £16.99, down from £18.69. That's a kilo price of £67.96, down from £74.76.)

I got mine from Brindisa Spanish Foods at a rather more sensible £11 for 300g (£36.66 per kilo). Any Portuguese folk reading this will be shaking their heads. In their supermarkets? 11.99 euros.

Recipe coming right up. But a word of warning. Do not get your ingredients and assume you'll make it for your dinner that night. Read on. You will need a deep oven proof dish.

Cover the cod fillet in cold water and leave to soak, changing the water three or four times. I gave mine about 24 hours, leaving it overnight, changing the water in the morning, then every three hours. Note that times may vary. After the fish has had its 2 minutes cooking time (that comes later - see below) taste a section near the tail (that will always be the saltiest part) to check. If it's still too salty, change the water and boil for another couple of minutes.

But we're ahead of ourselves. Before cooking the cod drain it and put it on a board, skin side down. Check for any bones and remove them, then skin your fillet.

(If you haven't skinned a cod fillet before, it's very simple. With a long, ie longer than the width of the fish, sharp knife make a little nick into (not through) the skin at the tail end. That will allow you to get the knife under the flesh. Holding on to the tail, and with the knife angled slightly down towards the skin, wiggle the knife while pulling the skin. Gradually work your way up to the head end. Watch Nathan Outlaw doing it here.) Cut the fish into pieces about 2cm square and set to one side.

You basically have four processes. Onions/fish; potatoes; béchamel sauce; assembly. There's a bit of multi tasking involved. Read the recipe. Work out precisely what pans, dishes, utensils and ingredients you'll need and have them looked out, allowing yourself plenty of space. When the onions are browned (see below), set the oven to 200˚C/Mark 6.

The onions will take the longest time. Fry them in the oil until golden brown, stirring regularly. While that's happening, boil the fish in boiling water for 2 minutes (see above). Drain and put to one side. At that stage bring your potato slices to a boil in salted water. Cook until just tender and drain. Keep them covered.

When the onions are golden and slightly sticky, add the wine, bay leaves and piri piri. At this stage put your oven dish in the oven to warm. Simmer the onion mixture gently for 5 minutes then mix in the fish. Check the seasoning. I found mine needed a little salt at this stage as well as pepper. You can switch it off for now while you make your béchamel in the usual way. (If you don't know how, find it in this pie recipe from a year or two back.) You'll want it reasonably thick, but thin enough to pour. Make sure it's cooked properly and doesn't taste of flour.

I had some parts done in advance, but I made sure they were all warm before assembling (apart from the cream).

Put half of the onion/fish mixture in the base of your dish. Add a layer using half of the potatoes, Salt them lightly. Repeat. Pour the béchamel over the dish, making sure the whole top is covered. Then pour over the cream and top with breadcrumbs. Into the oven for about 15 minutes until bubbling and nicely browned.

To avoid third degree burns to the oral regions allow to cool a little before dishing up. I served with peas and sweetcorn.