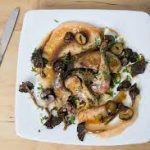 We really aim to be seasonal here, and today we hit double top. The partridge season started at the beginning  of September. While it has been a rotten year for grouse, partridge are plentiful. September is also prime time for wild mushrooms. If you forage for your own, you won't need me to tell you this. If, on the other hand you don't, you will find many types to be had in decent specialist shops including, possibly, the same place that you source your partridge.

Whisper it, but when it comes to wild mushrooms, I tend to adopt my alter ego of Phil S Stein. If you cook them by themselves, you'll probably add garlic and parsley, thus rendering them all much of a muchness, in the same way that it's impossible to tell snails from many other proteins in a blind tasting. I'll make an exception in the case of morels, which have a deep, nutty, almost meaty flavour. The only trouble is that they are in season around March to May. When I was looking for a good recipe, I was surprised to find one from Keith Floyd for partridge with morels. Odd, but I've adapted it. You will need a solid pan which can go both on the hob and in the oven.

The principles for dealing with any mushroom are the same. Don't wash them, as they will  absorb the water. If there is any dirt, brush it off lightly.

My problem with all game recipes is the timing. The older the recipe, the longer the cooking time; and, obviously, the older the bird, the longer the cook. At this time of the season you will be getting young game. Floyd's recipe involves simmering on the stove: I would suggest cooking in the oven with regular basting. Use your judgment - you want the meat to be nice and pink. A couple of years ago. I did a variation on a Phil Vickery recipe, involving roasting at a higher heat for quite a bit less time. That produced meat which was a little too rare for many. This is a more traditional style of dish.

Preheat the oven to 180˚C/ Mark 4. Into the cavity of each bird, put a sprig of thyme, a few pieces of chopped onion, a couple of pieces of bacon, and some pieces of mushroom. Season inside and out with salt and pepper. Brown the birds all over in the butter and oil. Add the bacon and onions until they too are browned, turning the birds occasionally. When the onions are beginning to brown, add the rest of the mushrooms and stir well. Flame with some brandy or Armagnac (keeping your face well clear).

Add the chicken stock and bring to the boil, then transfer to the oven. Cover and cook for 15 minutes (see above) basting occasionally and turning the birds. Remove the lid and cook for a further 10 - 15 minutes. This is where the judgement comes in, as you don't want to overcook. You will be jointing them before serving, so don't be afraid to pull at a leg to check progress. When the partridges are cooked, remove to a separate warmed plate and cover with foil. Like any meat, they need to rest for a few minutes. Return the pan to the hob. If there is excess liquid, reduce over a high heat. Add the cream and allow to bubble to create a thick sauce. Adjust the seasoning - more s & p will be needed.

Carve the birds into four pieces and spoon the sauce over or under according to your presentation style.