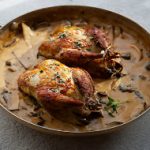 Like summer’s lease, the game season hath all too short a date. Enjoy it while ye may. Those with longer memories may recall that I did a partridge recipe a couple of years ago. I cooked the legs and crown separately. I was very kindly gifted a brace the other day, and decided to roast them whole. Hitherto, my practice when roasting has been to stick whatever it is in the oven, possibly buttered, larded or whatever, then take it out some time later and expect all to be well.

That’s no doubt one of the reasons I have been a game over cooker in years gone by, as I mentioned a couple of weeks ago with the pheasant recipe. In mitigation, I would point out that more than one recipe I consulted for today’s wee birds would have had me bake them for half an hour before resting. Today’s recipe takes 13 minutes in the oven, not 30. Once again I pay tribute to Game, New Ways to Prepare, Cook & Cure by Phil Vickery and Simon Boddy for the cooking time. Their recipe uses white wine, chanterelles, and spinach. Mine has marsala and mushrooms and is a fair bit simpler.

When roasting, I am not normally a baster; however the more delicate your ingredient, the more careful you have to be. Simon Hopkinson and Lindsey Bareham’s Roast Chicken and Other Stories has been voted the most useful cook book of all time. In their recipe for the eponymous dish, the authors advocate a lot of basting. So when Vickery and Boddy advocate just that for a partridge (average weight 375g) I was inclined to listen.

As ever, a few comments. To cook, you need something which works both on the stove and in the oven. I have a very good, large, all metal sauté pan, which was ideal. For the resting, I used an oven proof plate which had been in while the birds are roasting, taken out a few minutes before they were. The combination of butter and oil is standard, but getting the distinction between nut brown and burnt is a fine one. Keep more butter to hand just in case. My definition of a “large knob” of butter is about 30g. I used marsala, but you could use white or red wine, possibly with half a tsp of sugar. After roasting any bird you would use the carcasse for stock (yes, you would, please don’t tell me otherwise). As you have so little left to work with after cooking a partridge, it makes sense to use the bones to enhance a basic chicken stock. When they immediately come out of the oven, the birds looked a little pink for me, but after the resting they were perfect. Some may prefer less oven time.

Preheat the oven to 220°C/Mark 7. Season the birds outside and in with s & p. On the stove melt the butter and oil mixture to a fairly high heat. Brown the partridges on all sides. Turn each on to one side, baste, then put in the oven. After 5 minutes, turn to the other side, baste and roast for 5 minutes more. Finally turn them breast side down, baste again and cook for a further 3 minutes. Take out of the oven, put the birds on a warm plate, cover with foil and rest for 10 minutes (the birds, that is, not you). This pathetic joke sounds reasonably familiar. Apologies if I’ve used it recently.

While the partridge is resting, start the sauce. In a clean frying pan, melt the butter and fry the shallots over a reasonably high heat. Soft and brown is the desired result, which is why they have to be very finely chopped. Add the mushrooms and fry for 3 or 4 minutes. Leave the pan to one side.

Carefully remove the leg and breast meat from the partridges and continue to keep warm. Cut each carcasse into three pieces. Put into a separate pan and add the Marsala. Boil until reduced by two thirds. Add the stock, bring back to the boil and reduce by a further two thirds. Strain the reduced liquid into the mushroom pan, boil down further to reach the desired consistency and check the seasoning.

To serve, spoon some of the sauce on to a hot plate, arrange the leg and breast meat, and top with a final drizzle of sauce.