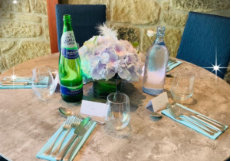 This is an accidental review, proof that good things can occur by happenstance. It started with plans for an outing, a jaunt, a wee run in the car. The sort of thing that retired people are supposed to do. The truth of the matter is that L and I are so busy we seldom find a day when both of us have clear diaries.

A rare such Saturday having set fair, we decided on a visit to the House of the Binns, latterly home to the maverick MP Tam Dalyell, and his ancestor Bluidy Tam, I carefully checked the opening hours and we tootled off. Now there’s no point at all in going to West Lothian without popping in to see Andy and Neil, cheerful proprietors of Castle Game Scotland, just outside Winchburgh. This is a newish game dealer’s business with fabulous produce and keen prices. There will be venison all year round, including sausages and burgers, and multitudinous other good things. I love pigeon and rabbit, and have no idea why we don’t eat more of both. In the main game season the range of produce soars. They have recently started stocking langoustines, mussels and scallops, fresh from Argyll. Anyway, it’s Andy who tells us about Mason Belles, whom they supply.

What sort of jaunt is it without a bite to eat? And as we have time to kill before the National Trust for Scotland open the doors to the Binns, into Linlithgow we go.  A menu at the entrance undersells the place, suggesting it leans more towards the tea and scones and light lunch type of fare. You go down a little vennel and emerge with the restaurant on the right and an attractive garden beyond. At the risk of sounding condescending the décor in high street places can be a little underwhelming. Here, on the other hand, there is a clear colour scheme and theme. While some furniture has been taken over from the previous incarnation, the blues and golds are harmonious. Owner Linsey Scott and/or her designer have given this a lot of thought. Cups have been specially made, and the water carafes are tinted to match. In short, it’s much better than expected. While the menu on the street does say that it lists but a selection of what’s on offer, there was no mention of dishes with Andy’s venison or wild boar, and I’m not sure I would have entered without his recommendation. A tiny tip: your menu on the street is truly your first impression.

The food is lovely. Loch Etive Trout is home smoked with local gin as a cure. It comes beautifully presented with some lightly pickled veg and dill. The idea of Jerk Ginger Beer & Lime Chicken Bites is a little better than its execution. Deep fried chicken balls are slightly over done and a little dry, but that’s forgiven because of the sensational mango, corn and tomato relish which comes with them. I’m not sure why I ordered red mullet. It’s not a favourite and it didn’t fail to disappoint. A couple of fillets were lacking in both seasoning and flavour per se; however, they came on a bed of many good things, a buttery gloop with chorizo, sweet potato and samphire. Herb roasted wild boar saddle almost certainly came from Andy and very good it was too. With it were served orzo with wild mushroom, cabbage, cauliflower purée, and a cider jus. All this for under fifteen pounds. The prices really are astonishing. A ten-ounce ribeye with all the trimmings will set you back just £23.50.

I know very little about proprietor Linsey. (Mason, I think is her son’s name, and Bell may be a family name. Or I could have got that all wrong.) In the one profile picture of her which I could find, she looks about 14, though 20 years have passed since she left catering college and she has a solid CV. More importantly I noticed a stock pot bubbling in the kitchen. You don’t find these in too many soup n’ sandwich joints. Stick with soup if you will – the menus have something for everyone - but why would you be so daft when the real cooking is of such a standard?

I forgot to mention the lovely staff. I suspect our waitress may work there only at weekends. I mentioned the source of our recommendation. Ah, yes, she said, one of our suppliers, I think. How many waiting staff in more upmarket places know where their stuff comes from? This place opened its doors nine months ago. I have no idea how business is going, but it’s the type of establishment you really want to succeed. Good people of West Lothian, be aware of what you have: good people of central Scotland, if you’re in the area do visit.

Which was more than we were able to do at the House of the Binns. The NTS website lied. It was shut.