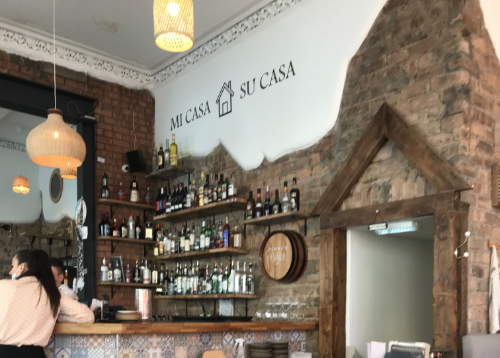 At the turn of the year, I hinted at a new hunting ground for Tom Eats! expeditions in Edinburgh. With a little local knowledge, you would be forgiven for looking in the direction of Leith Walk, which is the site of the other La Casa in town. Certainly home to many an eating place, of varying quality, but not all that near me, not, at least, until the trams get their act together. (You will note that I make no reference to the official inquiry into the tram project, which has now been running longer than the first phase of the construction project. Let's move swiftly on.)

My new stomping ground is Dalry Road, not a thoroughfare I knew well until lockdown started and our daily walks took us further afield. Locanda da Gusti was reviewed very early on in Tom Eats!, predating this current website. The only one to have had the treatment here was the (on the night) very disappointing Pizzeria 1926, so we have almost a blank canvas. 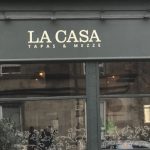 A crisp March day saw us entering La Casa, Dalry Road, a very pleasant casa indeed. I'm generally suspicious of places which look to present two different cuisines, even if they can both be loosely hauled together under the Mediterranean banner. I've been unable to find out who owns these two little beauties. The websites simply refer to a young family who loves Mediterranean food and flavours, Such sites, of course, are for promoting one's establishments. Not shy, our Casa owners. Referring to to opening number 2, they write (we were) welcomed by the locals with their arms (and mouths) wide open! Today we can proudly call ourselves many’s favourite tapas and mezze places. Well, I'll be the judge of that, thank you.

We've all been in tapas joints where you could get more sustenance from a Ryanair bag of nuts than from some of the portions served. Here the recommendation was to go for three plates per head. Well, La Casa ain't like these other places. Four dishes between two saw us rather full. Tapas isn't an entirely accurate description anyway. As their own blurb points out, you are in Greco-Spanish territory, tapas meet mezze.

From the Iberian side a portion each of patatas bravas and albondigas. Whoever cooked these knew his or her business. Big, bold, meaty meatballs, well seasoned and sauced; the potatoes freshly cooked, spicy but not a bit soggy. From Greece came the dish of the day, spanakopita, that lovely combo of filo, spinach and cheese. Wonderful. The only less successful note came from the loukanika. The name comes from a large Greek sausage of either pork or lamb, typically seasoned with orange peel and fennel seeds. This came in stew form with leek and peppers. An odd flavour, not particularly to our taste.

It's certainly been embraced by locals in what is an interestingly diverse area. Various friends lunching in pairs, and a fair smattering of solo diners, male and female. It's the sort of place where everyone feels relaxed, due in no small part to Erolia, the smiling Greek front of house lady. We sampled but a small fraction of the food on offer. There are a couple of dozen offerings from the tapa/mezze list and eight main courses. If you are a regular, the blackboard gives another range of options. On the dessert menu, Mediterranean favourites vie for your attention in the form of baklava and crema catalana, with a pit stop in Italy for the tiramisu. 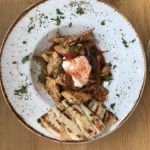 Yes, that really is a tapa!

Slightly concerned that I hadn't sampled enough for a balanced review, I made a return visit, this time well looked after by Oreste and Angeliki. Better try a main, I thought, with a wee tapa to start. Might be too much, warned Oreste. Eh?! It turned out he had a point. A special from the board was simply named Stir Fried Chicken. At £7.95, how big is that going to be? Well, at a guess, about one and a half pieces of breast meat. I ate half of it, and L was more than satisfied with the rest for dinner. I haven't tackled a mixed grill in years. Tackle turned out to be the correct word. A large butterflied chicken breast, a lamb chop, some grilled pork, a chorizo and a Greek sausage, probably, I guess, the loukanika. Having been slightly deterred by Oreste's introduction, I had decided against ordering chips. Just as well since half a hectare of them were to be discovered under the half kilo of meat. For under 20 pounds. I could bang on more about value, but you get the picture.

On the wall is painted that mantra of good hospitality, mi casa su casa (my house is your house). For anyone within a reasonable distance, this place should be everyone's Casa.