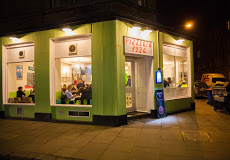 What do you look for in a great pizza? For me there are three essential components. The dough needs to be cooked at a ridiculous heat in either a wood-fired or specialist pizza oven; the filling should be of good quality materials, and be generous but not ridiculously so; and the crust should be well fired and the base crisp. We'll come back to that.

1926 is the second venture for the flamboyant Rosario Sartore, whose Locanda de Gusti across the road has been delighting diners for donkeys' years. A proud Neapolitan, he, like many an Italian man, is a fanatical tifoso or football fan. 1926 is the year when his beloved football club Napoli was founded. The attractively simple dining room is festooned with club memorabilia, including mementos of its great European nights.

L and I went on a whim to rid ourselves of COVID induced boredom. The notion of sticking on the 6 o'clock news to hear of hypocrisy and incompetence from all sides, allied with the nauseating finger wagging and endless holier-than-thou spiels was more than we could bear. So a quick call was made: they could fit us in if we could get there sharpish.

Not a problem. A few minutes on a 26 bus to Haymarket, then a quick stroll up Dalry Road, and hey presto. If you haven't ventured into that neck of the woods for some time you may be in for a surprise. Once upon a time Rosario's Locanda was an isolated culinary beacon. Now you could eat in a different establishment every day for a fortnight. Many more Tom Eats! explorations to be had.

1926 is on the site of what was a rather good Chinese restaurant, one of those unshowy places where you tended to be the only European in sight. Presumably it was once a shop. It's quite a plain space, with the pizza oven and kitchen in plain sight straight ahead of you. Box number 1 ticked. It was busy at 6 o'clock. This gave us the advantage of being able to see the size of the plates on offer, that advantage being that we didn't even consider the offer of a starter. That section of the menu, entitled Bites, could offer you some olives, but most things were far more substantial. Even as a gluttonous teenager I think I would have struggled had I started with, say, polpette (meatballs), lasagne or panzerotti (fried croquettes of potato and mozzarella). 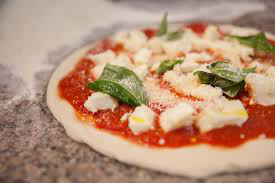 So to the main event. The menu features two dozen types of pizza with a couple of specials. Some are old favourites, such as 4 Seasons and Margherita. (Hands up if you knew that the latter was invented in honour of Queen Margherita of Italy, the colours of the tomato, mozarella and basil, representing the red, white and green of the Italian flag. OK, you can put your hand down now. No one loves a smart arse.)

But there are many new things to try. I was particularly impressed by the scrupulous attention to detail in listing the ingredients. Some are made using mozzarella, others with the cheaper fior di latte. This is made explicitly clear on the menu. Some pizzas feature provola (smoked mozzarella) or burrata (mozzarella with cream), ingredients rarely seen in less authentic establishments. It is easy to tell if a pizza is made with mozzarella or fior di latte. The latter goes stringy when it's heated: mozzarella simply melts in little pools.

There is homage to Napoli's most renowned giocatore, Diego Maradona, in the form of A'Pizz e Maradon. (I'm guessing the menu is written in Neapolitan dialect.) This includes provola, pork belly, potatoes, crispy onions and rosemary. Try unlocking a catenaccio defence after one of those. (If you're not a football person, catenaccio is a word meaning door bolt, applied to an Italian football tactic devised in the 1960s. Click here for more information.) A small word of warning for you if you're on a tight budget: while the menu appears on the website, prices have changed. Diego's delight is now three pounds dearer than stated online. 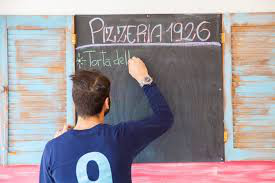 L had the special featuring creamed zucchini (courgettes), mozzarella, bacon and pine nuts. I went for a bit of heat. The Vesuvio, in addition to tomato, cheese and basil, has both 'nduja  (a spicy soft salami from Calabria) and spicy pork sausage. L found hers a little bland, though I quite liked it. The flavours of mine hit the spot, hot but not excessively so. Box number 2 ticked. But here's the rub - they just weren't properly cooked. Our charming waitress offered to have them put back in the oven. A few minutes later, to our mortification, she brought us two freshly made specimens. We tried to ignore the black looks coming from the chefs. The verdict? Better than many but lacking the thin crispy base which you get from the best pizzas.

All in all, a little disappointing - but better than staying home moping about the Plague.