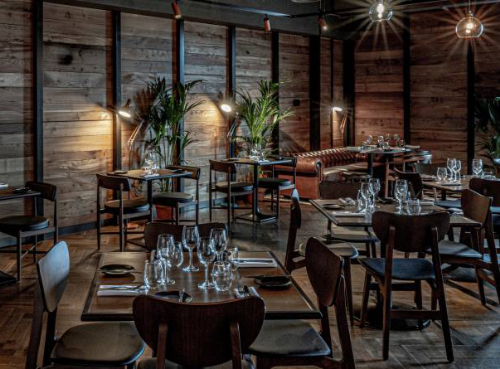 It ain't what you do, it's the way that you do it/That's what gets results.

The Funboy Three and Bananarama

The fun boys and girl trio comprising the Sometime Brewing Giant, L and me meet up from time to time in London or Edinburgh. Lunches are long, seldom wise and generally of good quality. The latest cancelled foreign trip - the eleventh in all - meant that we were indeed able to meet when SBG travelled north. Every cloud, and all that.

A visit here wasn't high on my list, but I knew that SBG was a long time Gordon Ramsay fan, so there we were. Why the lack of priority? Well, I'd read the menu online. The something-for-everyone approach is fine for a neighbourhood brasserie, but I suppose I was expecting more. In particular I had seen many of these self same dishes mangled by inexperienced chefs in the latest series of Hell's Kitchen: The Young Guns in which 18 or so battled for a top job with Ramsay in Vegas. But I wasn't keeping up. Even before the pandemic Ramsay was rationalising his restaurant portfolio, gradually moving away from the top end, Michelin-is-King sort of place. In other words he was developing the offering that is Bread Street Kitchen.

The first one opened in London 10 years ago - in Bread Street, curiously enough. There are, I think, five in the group, Edinburgh being the first outside the capital. Liverpool is coming shortly and the group apparently plan to have fifty by 2025. You have been warned. This one is in the new development on the south side of St Andrew Square. It is big - over 7000 square feet over two levels - and quite noisy. As far as I can see from pictures of the others, the design will be similar throughout. It's boisterous and rackety - but it feels right as soon as you go in. SBG, who has sampled the full gamut of Ramsay places says he has always been struck by the high quality of the staff. We were warmly greeted by two charming ladies, taken to our table, and then we met Paulo.

Paulo from Portugal.  What a waiter. What a wine waiter. What a man. We visited in December and he is a shoe in for Server of the Year. No, make that the decade, and it still has eight years to run. As I detest the idiots who claim to give 110%, I can't give Paulo 7/5 for service, but I'm tempted. We had a ball here, and Paulo takes almost as much credit as the assembled company.

When I say that the menu had burgers, fish and chips, butter chicken curry, steamed bream, roasted cod, pork chops, you're perhaps beginning to understand why I was initially a little underwhelmed. There is a big emphasis on beef. Large cuts for sharing are served on the bone, and priced per 100g. The menu tells us that they are generally a minimum of 900g and are great for sharing. Thus ribeye would be setting you back a minimum of £94.50 before the 12.5% service, and they rub it in by wanting another two quid for a sauce. It would come with tomatoes and mushrooms, but any carbohydrate would cost you extra. Price wise the (excellent) beef Wellington (see below) with one side dish each is £96 for two. At Grazing by Mark Greenaway, the same dish for two is £65, plus £10 for two sides. A bit naughty, Gordon.

Now I know that good beef is expensive - but I also know some beef wholesalers too. Don't be fooled by the money you pay at top butchers. I actually found this pricing a little odd, since most of the rest of the menu is quite fair considering the location and the huge staff.

Tuna tartare isn't much of a rarity these days, but a dish of this quality is. Described as spicy, the menu didn't lie. Served with wonton crackers, little blobs of whipped avocado and crème fraîche, this was a blow you away plate, in a good way. A superfood salad for Superwoman had a pile of worthy things, kale, quinoa, cucumber, corn. Pulled together with an orange dressing and spiced cashews it was voted a success. 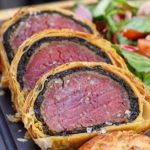 Gordon Ramsay's signature dish is his beef Wellington. It's for two people. SBG and I  made our minds up in two seconds flat, only to be deflated by Paulo. Sorry, he said, not ready yet. For anyone who doesn't know, a Wellington is quite a fiddly thing, involving the most finely chopped mushroom cooked until all moisture has disappeared. (A duxelle, if you want to be technical.)This is allowed to cool then spread on the beef. Some chefs use a layer of pate, though I don't think Gordon does. You then have the problem of how to keep the puff pastry crisp. (Cynics will tell you it's just a posh pie.) Some use a pancake to wrap around the beef - here I think there may be Parma ham involved.

Cynics might also say that Paulo was pretending to let us down to make us happy again. As two disconsolate men were choosing second best, he returned with a beam to say that, yes, after all, we could go to the ball. The accompanying truffle mash (which is included, not as an extra) was stunning, and there was a very good red wine sauce as well.

After all of that, you might fear that L lost out. Not so. Roasted cod came with crushed potatoes, artichokes, capers, red wine and lemon sauce. Despite a manful struggle with a large welly I still manged to snaffle a taste, and very good it was too.

Puddings, had we wanted to do ourselves serious damage, would have included pineapple carpaccio, cheese cake, sticky toffee pudding and chocolate fondant, crowd pleasers all.

Why I think this roll out will be a success when so many chains have struggled even pre COVID, is that everything being served is what the reasonably well heeled market wants. Ramsay is clearly skillful in his recruitment policies. To that end I was delighted to see and chat to Dan Ashmore, a long time friend to this column, running the pass in his new role as Executive Chef. While none of the menu is all that technically difficult for a professional, keeping up standards will be vital. As you may have seen in the last On The Side column of 2021, the esteemed food critic of the Alba section of The Times will disagree with the positivity of this review, but who cares? Go and judge for yourselves.

It ain't what you do, it's the way that you do it.