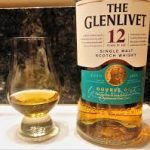 I wrote recently about attending the Masterchefs of GB lunch. There were sponsors a-plenty and we all received a goody bag to take home. Sponsors included The Glenlivet whisky and Bon Accord soft drinks. Not only did the bag have samples, it contained a few cocktail recipes which I thought I would share. But first, a word about some of the ingredients.

Glenlivet whisky, one of the most famous Speyside malts, will need no introduction; however, I wasn't aware of the variations on the theme, particularly the Caribbean Reserve which features here. Matured in rum barrels, apparently.

Bon Accord is a less familiar name, though readers of a certain age may remember delivery lorries in the last century. If you're below that certain age, you may be surprised to learn that the most common way of buying milk was to have it delivered daily to your door: if you're in that category you may be downright amazed to discover that many people also got a regular delivery of soft drinks, many in quite lurid colours. The original Bon Accord company was founded in Arbroath in 1903. It closed its doors in 2000 after business went flat. In 2016 it was refounded by Karen Knowles and Nathan Burrough, and has been fizzing along nicely ever since.

A final word about Bőker's Bitters which are included in the last recipe. I'd never heard of them. All I knew for certain was that it couldn't be a Scottish ingredient. Boke or boak is the Scottish word meaning to vomit. The product was invented by Johann Gottlieb Bőker in 1828 and manufactured by the L J Funke Company of New York. (I swear I'm not making this up.) Prohibition did for them, and they closed their doors in the 1920s. The recipe was believed lost until 2009, when an old sample came to light. Various companies now manufacture what they claim to be the original stuff. These companies include Better Bitters and Dr Adam Elmegirab. (Stop it! it's childish to laugh at other people's names. Thank you.)

Now I don't really drink cocktails much, and as I don't much care for whisky, I can't vouch for any of these, but they look interesting. The first is scarcely a cocktail, but if you would like two slices of dehydrated orange, they came in my goody bag. First reasonable offer secures.

*I quote the recipes verbatim. For any drink with ice, I would always add the ice first and pour the ingredients over it. Hey ho. 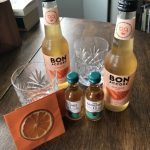 Pour the whisky into a highball glass then fill the glass with ice.* Top with ginger beer and stir. Garnish with dehydrated orange.

Add all the ingredients to a mixing glass or jug. Add ice and stir. Add ice to an Old Fashioned glass. Strain the drink into the glass and garnish with a lemon wheel.

Fill a Highball glass with ice. Add the whisky, apple juice and bitters. Top with the soda and stir. Garnish with a rosemary sprig.

(Don't write in to tell me that that's not a rosemary sprig in the photo. It's Glenlivet's picture, not mine.)