Here at Johnston Towers we've been eating a lot of venison of late. In a fit of thoughtless shopping I'd stocked up the freezer at Castle Game Scotland just a week before my butchery course at Edinburgh School of Food & Wine. To be frank it's no hardship. I know I've featured venison dishes before, but this underrated meat simply doesn't get the praise it deserves. Let's look at a few facts.

So why aren't you using more of it? (If you're a vegetarian, that's OK. If you're a vegan, I don't want to know you.) Perhaps you think that it needs marinading and cooking for days? Get away from the image of the massive, Monarch of the Glen style red deer. Most of what we eat these days is roe, sika or fallow. 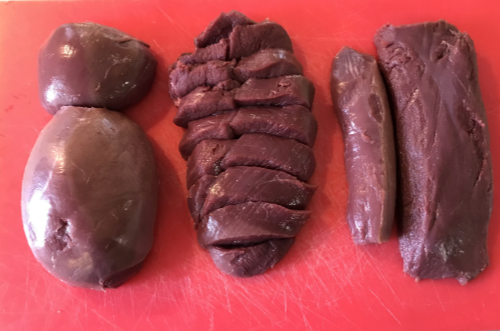 Or you believe that it will be enough unless you buy expensive loin of venison? Not so. Having been a customer of Castle Game Scotland for some years now, I've probably eaten most parts of the beast. Even the majority of the meat from the hind leg is as tender as sirloin of beef, at a fraction of the price. Now you could do as I did and learn how to debone your leg and separate it into the various cuts. (Having said that, I'm not sure I could do it again without help.) Or you could pop out to CGS HQ just outside Edinburgh where Andy, Neil and team will provide you with whatever you need as well as advice on how best to cook it. Here are three ridiculously simple ideas under the headings Very Easy, Easy and Not Difficult. A summary, really, of all my recipes. As you will have worked out by now. my skill levels won't allow me to progress to Difficult.

Let's take topside. If you like venison, and like roast beef, you'll love this, and your wallet will love you even more. What you may not like is my inexplicable lapse from the metric system when it comes to roasting times. I've attempted conversions below.

Preheat your oven to 220˚C/Mark 7. Ideally you would use a frying pan which you can transfer to the oven. If you don't have one, you can transfer to a roasting tin, but make sure it's preheated. Make sure the meat is at room temperature. (Doh! have you listened to nothing Tom Cooks! has told you?)

Get your frying pan hot and add a little vegetable oil. Season the meat all over with s & p, then brown on all sides. Forget the notion that you're "sealing" the joint. This is simply for a bit of extra flavour. Transfer to the oven and roast for 10 minutes per pound and 10 minutes over. According to my calculations that equates to 22 minutes per kilo and 10 over. Take out of the oven and allow to rest for at least half of the cooking time. This is actually very nice served cold as well, when you can slice it more thinly and be even more economical.

My experience is that leg steaks are usually fairly tender, but every now and again they can be a bit chewy. You can cook them exactly as you would cook a beef steak; however, as they are fat free they can be a little dry, and benefit from the glaze in this recipe. As with the topside, season them first.

In a fairly hot pan, melt a generous dod of butter and add a little olive oil. Butter on its own will burn. My mammy used to repeat the mantra, oil for heat, butter for flavour. When the butter has melted and is starting to sizzle, sear the steaks for about a minute on either side. Reduce the heat and cook until they are almost cooked as you like them. Please don't overcook. Remove the meat from the pan and set to one side. Increase the heat and pour in about 100ml of port and a tablespoon or two of redcurrant jelly. Bubble the mixture, stirring well until it has reduced to a fairly sticky glaze. Return the meat for about 30 seconds per side so it's nicely coated.

Use the silverside for this. It is, essentially, a stew; however, many restaurants these days, for reasons of economy, will serve meat dishes cooked two or three ways. I cooked this for a dinner party recently along with leg steaks. I reduced the consistency of the liquid quite a bit, and broke up the meat. It's perfectly nice (nay, delicious) served as an ordinary stew.

In a casserole or heavy oven proof pan brown the seasoned venison in stages and set to one side. In the same pan, brown the veg. Season with a little s & p. If using a stock cube or stock pot, ca' canny with the salt, as you'll be reducing the liquid later. Add the wine and bubble for a few minutes to get rid of the alcohol. Return the meat to the pan and add the stock, herbs, juniper and orange peel. You should have enough liquid to cover the meat. Bring to a simmer and cover. Cook  in a slow oven at about 160°C/Mark 2. After an hour, remove the orange peel and bay leaf. You are just looking for a hint of each, not an overpowering flavour. Cook until the meat is falling apart tender.

Strain off the liquid into a clean pan and fish out the thyme and juniper berries. Reduce the gravy to your desired consistency. Check the seasoning. When serving this as part of a composite main dish, I reduced most of it down, shredded the meat and left just enough liquid to moisten it. For a more conventional stew, just bring it down to whatever consistency you like.