On Sunday I was cooking burgers at the Jubilee street party. Been up to much this week? enquired a friend. Yes indeed, I replied. Five days cutting up dead animals. It's not the most normal of replies, and attracted the attention of a good few folk. More details? Certainly. 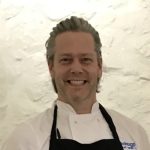 A couple of months ago, I wrote about an excellent bread course which I attended at The Edinburgh School of Food & Wine at Newliston, just west of Edinburgh. The first event which I had booked was in fact this butchery course. It was only when online to check some details that I came upon the bread one. In the last article I singled out course teacher Ash MacMillan. We got on well, so I was delighted to learn that he was also in charge of the butchery course. (It is not recorded what Ash thought of the prospect of my company for a week.)

Bright eyed and bushy tailed - that's a reference to me, not to the things we were to cut up - I arrived 15 minutes ahead of time. Coffee with Polish Pat who does patisserie. Ash arrives. The clock says 10.05. Where is everyone? Turns out it's a class of one. Wow!

There are a lot of large beef bones. From these, after roasting, then simmering and skimming for three full days (the pot was left in an AGA overnight) we will extract the most intense jellied beef stock. In the course of the week we'll get chicken and venison versions too. Proper stock: truly one of the major things marking the difference between a pro and amateur kitchen. 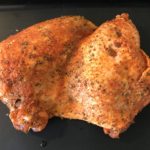 Boned Poussin. I confess, this was Ash's one.

I had asked if someone could show me how to bone out a bird, leaving the flesh in one piece. Well they have a sense of humour here, as Ash brought out a poussin to play with. You know it, that pygmy chicken barely larger than a postage stamp. A fiddly way to start the week. Ultimately successful, though and very tasty. It must be said that we lunched very well, often quite late. No chance of dinner being cooked for L.

From there we moved to a chicken. That I know how to do, so I moved from bottom to top of the class. Good tip about always removing the wishbone before you start. Quadrupeds beckoned. I should perhaps say that this isn't for the squeamish. Thumper was followed by Bambi. A number of people have looked away when I flashed the photies. 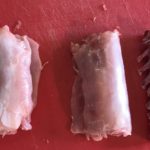 I didn't do biology at school, but quickly learned that the structure of most quadrupeds (and man) is broadly similar under the skin. Saddle of rabbit, however, is fiddly. The loin and sirloin are fairly tiny, and trying to get these neatly away from the spinal column ain't easy. Well worthwhile though as we lunched on a ballotine of saddle stuffed with a mousse made of the offal mixed with the chicken faux-filets and spinach. I hadn't used a water bath before.

Then three days on the main event. In came my friend  Neil of Castle 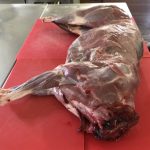 Game Scotland, a fine venison carcasse on his shoulder. I looked at the label which specifies not only where it came from (Saline in Fife) but also the name of the shooter. My old pal Murphy from Cowdenbeath. The food world is a small place.

Having coped with the rabbit, venison is actually easier, but there is a lot of it. I'm not sure why the word butchering  has a pejorative ring. You have a lot of respect for the animal. There is pride to be had in treating it carefully, easing away sinew and gently trimming connective tissue. Then there is the endless tidying, removing silver skin (that's the bluey-grey membrane) and any other unwanted bits. With a lot of help from Ash, my end result was OK, but far from the standard of what appears on our butchers' shelves. It's only when you try to replicate it that you come to appreciate the consummate skill of true 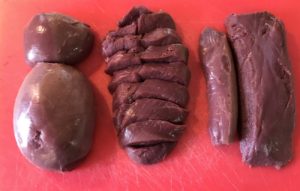 All from one hind leg. I did this lot.

But let's move on to the human dramatis personae. If you read the Chef Watch columns which appear here most months, you'll see that most of them seem to be born to it, never wanted to do anything else, started at 15 and so on. Not our Mr MacMillan. For 15 years he was a professional drummer. For about 10 years he toured the world with a band called Stiltskin. Their biggest concert was playing to a crowd of 25,000 at an event for fans at Euro 2012 in Warsaw. There is something ironic about leaving the rock scene because of the rigours of touring, then becoming a chef. The latter profession isn't exactly renowned for its 9 - 5 hours. After qualifying and working in a restaurant in Kinross for a time, he moved to ESFW. A quiet life? Well, he now also drums for well known Fife band Cut The Cake. As weddings and other functions resume post Covid, that's involving three gigs a week or so. They do say that there is something about chefs and drummers, but on the surface Ash is a sane guy with a beautiful wife and young daughter. We certainly had a lot of fun.

In addition to Pat I was reacquainted with Aneta. The two ladies came and went, creating boxes containing the most amazing looking afternoon teas. The other chef is Dereick Rushton, doing prep for forthcoming weddings, teaching tapas classes, you know the sort of thing. And finally, owner Nyssa Barron. Turns out I'd met her years ago when she was a stalwart of Caledonian Heritable. Oh, and a wee word for smiley Jessica, a school girl who came in to sort and polish the cutlery. Nyssa, you have a great team.

After we finished on the Friday afternoon, my car was groaning with the weight of produce. Venison in a lot of forms, shanks which we'd braised, that fabulous stock, and enough venison pithiviers to make me very popular with the neighbours.

This is a really great set up, whether you want to learn more about making food, or want them to cater for your event, large or small. Do check it out.

On The Side will be back in July