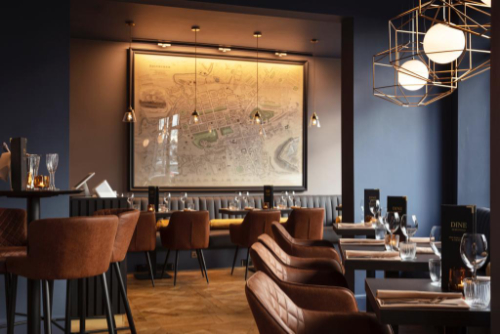 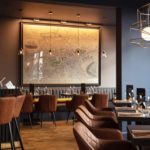 Regular readers of Tom's Food! will have been aware of the multitudinous problems faced by Stuart Muir and Paul Brennan trying to get their Murrayfield venture off the ground. The stylish flagship above the Traverse Theatre has been used almost exclusively for takeaway and delivery service - now a very crowded market - and the use by the neighbouring Usher Hall as a COVID testing centre didn't help even in the brief window when restaurants were allowed to open. Down the road from me in Roseburn, the new place suffered issues with services, equipment and suppliers. Intended to launch in October, the doors opened on 14 December, only to close again on the 24th as we entered Tier 4.

Yet it's fair to say they made a big impression in that short period, and the good people of Murrayfield are already asking for more. The idea is to provide an all day service, opening at 0830 for breakfast and brunch, and going right through to dinner. That's a huge logistical exercise, somewhat different from the mother ship. Signs are that they will carry it off with aplomb. Start your day with a selection of a few breakfast classics, then decide what you are going to do next. You may never leave.

I had a tour of the place just after they got the keys, and another the day before opening. The difference, especially behind the scenes and in the large basement area, is staggering. For more insight into the issues involved, read last year's post entitled How To Create a Restaurant. The website describes Dine Murrayfield as a community restaurant. It seems to me that they have called everything about right. A warm welcome - check; a good looking space with a comfortable vibe - check; and a broad selection of crowd pleasing dishes at reasonable prices - check again.

I should perhaps qualify that last statement. You will search in vain for burgers or pasta (it's a cut above that) but you will have a range of options, flexible in size and price, to suit your mood. On first glance, the menu would appear to list only three starters: on closer examination you find another five dishes which you can have as a starter or a main, then a list of six other mains, including scallops and fillet steak at £16 and £17.50 respectively. 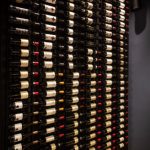 This generosity extends throughout. I prefer sparkling water to still, and am resigned to the three or four quid hit for a large bottle of something. Not here. Sparkling will come in a carafe, just like the still, free of charge. Some might raise eyebrows at a charge of £3.75 for bread; however, what arrives is a groaning board with three different types, made on the premises, accompanied by a dip (on our visit some glorious beetroot stuff whose recipe I covet), and butter from the youthful Edinburgh Butter Company, the best non French butter I've ever tasted.

Already quite full we stuck to classic crustacean starters, a prawn cocktail and prawn tempura with aioli. The latter came with SIX large prawns, expertly fried. For me, both the Marie Rose dressing and the aioli were rather timidly flavoured, but that's a small thing. It was a pleasure to meet another classic, a Chicken Kiev. A great dish, taken to the verge of extinction by over use, and restored here in its full garlicky pomp. At the price, I was expecting a scaled down version. I should have known better. A huge breast of chicken came with glazed beetroot and sour cream. If I was going for this again, I'd have passed on the starter, and we certainly didn't need the loaded roast potatoes topped with caramelised onion and smoked cheddar. The star dish was the roasted sea trout. Be warned that the fish is cooked very slightly under. That's deliberate  - I've encountered that at Dine HQ as well. A glorious fresh chunk comes in masala butter with pickled shallots and a delightful mango salsa. I am of an age where it irritates me slightly when green beans aren't topped as well as tailed, but perhaps that's a generational thing.

The experienced and lovely Leah was heading up front of house when we were there. She has been with the company for a long time, the only pity being that her room-illuminating smile is hidden by a face mask. With other staff there were one or two issues. It was difficult to attract attention to get the bill, and thereafter to have someone bring the card machine. In a place of this size that really shouldn't happen, but this was in the first week of opening. For me it comes under the heading of teething problems, easily enough resolved.

Paul and Stuart have created a star in the making. It's very near my house and I pass it regularly. In its brief fortnight of trading I seldom saw it less than full. The neighbours are talking about it. When it reopens I think that people will be beating a path to Murrayfield from much further afield. Best of luck, gentlemen.

A plea. For next week's Tom Eats! I have a guest review from Miranda Heggie. Thereafter the cupboard is bare. Why don't you share some of your best (or worst) dining out experiences? Email me at tgj52a@outlook.com.