Most of us will have eaten in a restaurant which has only just opened its doors. We will take in the decor, probably smile a little at the inexperience of the waiting staff, then get stuck in to the menu and wine list. How many of us give any thought at all to the process which has been gone through to get the place up and running? And if you're taking over a space which was trading just a few months ago, and which is kitted out with modern equipment, how hard can it be?

This column broke the news that the former Leopardo in Murrayfield Place is being taken over by Stuart Muir and Paul Brennan, the team who run Dine above the Traverse Theatre in Cambridge Street. I know them a little, and was invited to see the premises for myself and to discuss the project. That was back in September. By now I expected to be announcing the imminent opening. Read on.

At first glance, it didn't look so very different from the place I remembered. A good clean and a lick of paint, perhaps? That's before you scratch the surface. A huge amount of money had clearly gone into the conversion and refurb. The space was created by knocking a cafe and flower shop into one. The shop itself must have originally been two, but that predates my time in Murrayfield. The equipment had been bought brand new. Paul estimates that the whole thing must have cost about quarter of a million when it was done up last year.

The place was last opened as a pop up in February. The doors had been closed with food still in the fridges and freezers, and photographs of the extensive basement area did not make for happy viewing. All cleared, thankfully, before my visit, with shelving already making it look a bit more professional. While the cooker had been new, it was just a commercial version of a four ring cooker, totally unsuitable for a professional operation.

But the first questions for the pair have to be, why? and why now? Both men live in nearby Blackhall and had been aware of the site, and what they believe its potential to be. Many shrewd people in business will tell you that it's better to invest at the bottom of the market than when all is rosy. Stuart was running the kitchens in Harvey Nichols during the crash of 2008, and learned a lot about the impact of a period of austerity. He is confident that the proposed offering of 7 day, all day dining, with the availability of small plates and daily specials will be attractive to potential customers.

Paul stresses that engaging with locals is number one on the priority list. Tom Eats! has frequently noted that the most successful restaurateurs are those who really know their market and give it what it wants. Now you may be nodding wisely, thinking that these are simply truths universally acknowledged. But what else has to be considered?

We've mentioned the big clean up: but standards of cleanliness, hygiene and maintenance have to be kept up at all times. This is not to satisfy authorities or customers, but themselves. Having been behind the scenes in a few professional restaurants, I can attest that the kitchen at Dine HQ is one of the most immaculate I have seen. In their eyes Stuart and Paul consider the KPs (kitchen porters) to be as vital as the chefs or front of house staff.

If you enjoy eating out and are impressed with the service, this doesn't happen by accident. Careful staff recruitment and ongoing training are essential. It's more than knowing how to carry plates. All good staff have to know how best to engage with diners (and when to leave them alone); the best ones know about the food and can advise on specific dietary requirements; and they have to understand how to deal with difficult customers. They have to be able to operate the IT systems and be aware of the licensing laws and how they apply. 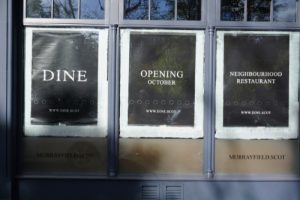 One of Dine's strengths is having Paul dealing with the back of house stuff, freeing Stuart to concentrate on getting the kitchen straight, designing and costing menus, arranging suppliers and getting the right chefs in place. When you sit at a table, how many of you ever think of, amongst other things, the legal issues involved in the lease or the transfer of the liquor licence; or getting the IT in place and the music system? Or the interior decor and design, and what pictures go on the walls? Or the unglamorous stuff, like dealing with council officials such as building and environmental services, and waste management contracts? Or every type of risk assessment, most topically keeping us safe from COVID?

Then you have to start planning for the unexpected, and no, I'm not talking about the C word - at least not quite yet. When I built my own office about 15 years ago, I was warned that the biggest headache would be caused by the comms. True to form, Paul discovered he wouldn't be able to get a line into the building till October 13 (and still hasn't got it yet). How that can happen when the existing business had a line is beyond me. But surely, once your decor is planned, you just get on with it? Well, they are currently on the third framing company for what should have been an incidental part of the decoration, half the leather for the fixed seating has yet to appear, and a container load of chairs has gone missing.

So things are about five weeks behind schedule, and are subject, of course, to whatever new lockdown restrictions come into place.

Paul and Stuart are adamant about one thing, and that is that Dine Murrayfield will one day open its doors and be a success. With luck, when most first time visitors arrive, none of this will have crossed their minds, and everything will be smooth and seamless. But those of you who now know better, are you sure you really want to open a restaurant?