Lest my good pals Nyssa, Ash and Dereick of the Edinburgh School of Food & Wine are concerned, allow me to allay their fears. Going to a cookery class is usually a fun thing to do. Read recent articles for details. 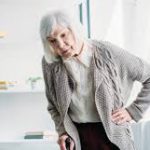 Today, I speak from the other side of the fence, to wit, one who was beguiled into running one. Those ladies who do the beguiling, they're all the same. White haired, charming, sweet even. (Yes, Fiona G, I do mean you.) And it's always for a good cause. And of course, Tom, you'd be so good at it. When will I ever learn?

Most people who have had to work with the public in areas of possible contention have probably been told on more than one occasion to get raffled. (I was a lawyer - I got much worse.) As a piece of mild abuse, it's fine, but a month or two ago it actually happened. Yes, I was raffled. The top prize apparently. Lord knows what the booby prize was. A cookery class run by my good self, won, if that's the appropriate word, by Dr M, a medical professional and International Woman of Mystery. Not to worry, Tom, you've done this before. It seemed a good enough idea at the time.

But as the date approaches it gets stupider and stupider. I've spent a few days here and there with chums who are rank beginners. We can have a laugh and finish up eating lunch with a glass or two. This week's victim is a total stranger and clearly can cook.

We have, it must be said, had a preliminary chat, and she sounds very nice. I have an outline in my head; however, as I start preparations in earnest, all sorts of strange things start to go wrong. The curse of the white haired lady is beginning to kick in.

I seldom follow recipes to the letter. But that's no use for a class: they need writing down. (Consider whether you could accurately record quantities for your favourites which you make without thinking. Just try it.) You need a lesson plan: you need to allow for your basic programme either over- or under-running. Oh, and you need to check supplies. All fine, but let's see what else the curse of FG has in store.

As I sweat over a hot laptop, the paper in the printer jams. I fix this, then it tells me it no longer recognises the wireless network. Have you ever tried using a printer keyboard to insert a 16 digit password? And then have it rejected twice. You press every button on your router to try to remedy the problem. NONE of this would have happened had I rejected that white haired lady. Then after it goes into the loop for the fourth time, your printing suddenly emerges and it seems to have fixed itself.

I then hear a metaphorical cry, and realise that my sourdough starter is starving. For various reasons I currently have two of them, Tony and Olive. Tony is now five years old. He recently fathered Olive. They are once again properly nourished. I am prepared to give one free to a good home, but if your initials are FG, don't bother to apply.

My last task of the morning, largely to get me out of the house, is to retrieve our axe from the sharpener. I probably shouldn't have been brandishing it in the street, but I can tell you that no white haired ladies came near me. Then, of course you start to look at your kitchen through a strangers' eyes. Do you have any idea how long it takes to do a full spring clean of just one room?

So the plan is made, supplies are bought, recipes written (and printed). Then you realise that in all good cookery classes you've ever been to, some kind, hard working, behind the scenes drudge has done all the prepping for you. It makes sense, of course. In a one day class from 10 - 4, when you plan to make about 10 dishes, it's daft to be slaving over a chopping board. Sadly, my kitchen contains no drudges, so there was only one person to get the bread to its first prove stage, make barbecue sauce, chop onions, peppers, garlic, chillies, ginger, carrots, and leeks, make pesto and breadcrumbs and weigh out all the other stuff. The class is due to start at 10. I start at 6.

Panic sets in. What if the recipes don't work? I'm cooking chicken two ways for lunch. What if I get it wrong? What if she hates the food? Fiona G, at this stage your ears should have been burning.

Well of course it was perfect. The IWoM arrived bang on time. She is lovely. Not only the perfect guest, she has even brought her own pinny - not required. And she also comes bearing a pack of good coffee and a bottle of excellent red wine. I like this lady already.

I bask in the reflection of my pristine kitchen. Well it was time I'd given it a good clean. My knives are usually quite sharp. Today they would have pleased a surgeon.  What did we do? Quite a lot, is the answer.

We started by making three different types of rolls. Jointed two chickens and made or prepped wings with BBQ sauce, and tandoori chicken thighs. The thighs and the faux filets became sweet and sour. One breast was beaten and panéed for a schnitzel: one was flattened, stuffed with black pud and wrapped in Parma ham. We ate these for lunch with a green salad and a potato salad which we made. The other two breasts were stuffed with pesto and breadcrumbed to take home.

Then we made two different pasta sauces. Then we did monkfish two ways, including a curry which takes only five minutes to cook. The value of advance preparation became clear at 9 that morning, when I decided it might be a good idea to take the monkfish out of the freezer.

And how was everything? Perfection, I say modestly but sincerely. Dr M, who had to pop back 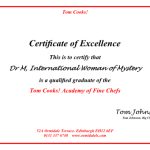 Who Wouldn't Want One of These?

the next day because I'd forgotten to pack her BBQ sauce, reported that her takeaway food was well received by her family, and that she's going to get back to making her own bread. While she didn't say it, I'm sure her certificate will have pride of place in her potting shed.

In short, we had a great time. Would I do it again? Whisper it, probably yes, provided no little white haired  ladies are involved.