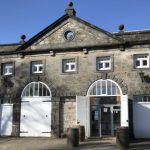 The plea to the Almighty to give us this day our daily bread is probably the most common prayer in the Christian world. After two days at the Edinburgh School of Food & Wine, I found myself with a fortnight's worth, and did wonder if I had overdone things a bit.

I have been making virtually all of our bread for years now. Very little shop bought stuff crosses our threshold. Two basic reasons. Making bread to a good basic standard is not only quite easy after a while, it's also enjoyable. Secondly, I prefer my loaf to have four basic ingredients as opposed to the twenty or so listed on the packaging of stuff which comes from Big Bread plc.

I hadn't been to the ESFW for a good while. I attended my first course there over 20 years ago, taught by a young up and coming by the name of Tony Singh. The school has changed hands once or twice, now owned by the lovely Nyssa. On their website to check something else I stumbled on this course by accident. A Bread Weekend, but at a level or two up from where I operate.

Regular readers will know that I recently had less than satisfactory experiences trying to make sourdough. That was the initial attraction, but there was far more. The schedule promised, in addition, sourdough seeded rye, baguettes, pretzels, challah 6 strand plait and grissini.

All very exciting, but first, a word of warning. It ain't the easiest place to find, even though I'd been there before. I'll spare you the details of my circuitous route. Come off the Newbridge roundabout towards all the car dealerships. Just past them there are traffic lights. Go right - on the correct road, hurrah! BUT if you discover you have taken the sharp right hand bend, you've missed it, as the entrance is quite well hidden on the left. Once you find it, the private road passes the pretty Palladian style house on the right, and you find yourself at ESFW in the former stables. 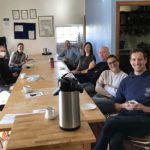 To be greeted by Aneta and taken upstairs to a light, airy well appointed space. (Not all cookery courses offer such good facilities.) There were nine of us, led by the ever cheerful Ash, a professional chef who actually did his training here many years ago. Chef's hours are crazy. Working here offers a rare possibility in that trade of a work-life balance.

I think all of us were bread makers of some experience. I was astonished to learn that on the last course Ash had had some students who had never previously made any bread. While I'll score the whole two days very highly, for me it's not one for beginners.

As you'd gather from the schedule, there was a lot of stuff to cover, helped by the fact all ingredients had been measured out in advance. At this level, some things are measured in fractions of a gram - microscales are recommended. If, like me, you are struck by how little time (proving aside) is needed to make a basic loaf, be prepared to be surprised. Dealing with sourdough or poolish is a slow business. So much so that I did not receive the warmest of welcomes going home on the Saturday completely empty handed. My explanation that I was wonderfully prepared for the next day cut little ice.*

There were new skills to acquire. Stitching was a new one on me, as was a coil fold. The former the method for stretching the sourdough before you pop it in the mould. The latter is a way of folding, by raising the dough and allowing a section to coil underneath. This, apparently strengthens it. By the time we were on to coil folding our baguette dough, we were past masters. 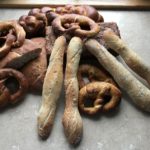 That, actually, is a terrible lie. I'm really not comfortable dealing with wet doughs. I have made baguettes before with a less sophisticated recipe simply using fast action yeast instead of poolish. Handling that dough is a right b*****d. Working with a pro would, I was sure, make it all easier. Well, I can now report that doing it Ash's way, this baguette dough is still a right b*****d. Space doesn't permit me to recount everything, but the Sunday's haul was amazing. Even if I discover where to buy diastatic malt powder, I'm not sure I'll be in a hurry to make pretzels again. The sourdough seeded rye, on the other hand, was not only the easiest to make, it was spectacular. I became very popular with the neighbours donating chunks of the challah, a lovely. plaited brioche type bread, each strand stuffed with a glorious date and orange paste.

If you're an average home cook and want to take your baking to another level, check this out. Sincere thanks to Ash, but the final thank you to Aneta, who not only cleared up, but made a fantastic lunch both days.

*The feedback I got suggested that Ash may, incorrectly, have read this as a criticism. Nay! Here at Tom's Food! we like slow, and understand that  preparation is King. There is, however, someone close to this column who is more into instant gratification.

Edinburgh School of Food & Wine offers a wide range of courses to suit all levels of  experience. Find more details here on their website. More bread in Tom Cooks! on Friday