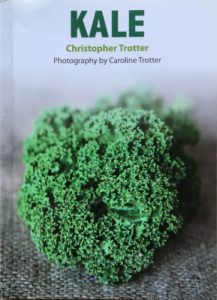 Continuing the kale theme from Wednesday's On The Side column, I'm indebted to the Trotters. To Christopher, without whom I would probably have continued to body swerve its mineral rich loveliness, and who has kindly allowed me to reproduce some of his recipes: and to Caroline, for almost all of the photos. (Observant readers will have noticed they are of significantly better quality than my usual.)

A favourite supper here in Casa Johnston is kale and bacon topped with a poached egg. Cook the kale and blanch as per Wednesday's basic recipe. Then cook some bacon in a frying pan. You can either completely cook the bacon first and set to one side. If you do that, make sure you finish the kale in the same pan. Alternatively cut the bacon into strips or lardons, partially cook them, then add the kale. A nicely runny poached egg on top brings a dish of colour to a dank day. Or for a more substantial dish-

Spiced Bubble and Squeak Cakes with Poached Egg and Spinach

No, that's not a misprint in the title, as I first thought. Here Christopher uses the kale in place 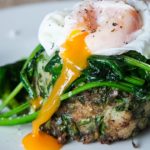 of cabbage to make a classic leftover dish, the one which the Irish call colcannon, then serves it with a layer of spinach. If you don't have spinach you could, of course, serve this on more kale. Note that Christopher specifies Hebridean sea salt - I'm sure Maldon will do just fine - and ground black pepper, which, I'm sure, is your default. You'll need a pan with a lid. *Christopher assumes you know how to wilt spinach. Rinse the veg, whether it needs it or not, then put it in a frying pan. The residual water from the rinsing is all the liquid you need. Cook over a medium heat until it wilts down. You might want to squeeze out any excess liquid before serving.

Soften the onion in the oil, then add the kale stalks. (Paying attention? That's the stalks, not the leaves.) Stir in the spices and cook gently for a few minutes. Then stir in the kale leaves. (Aren't you glad you were paying attention?) Season with s & p and cover the pan. The steam from the kale will cook the mixture. Remove the lid, allow any excess moisture to evaporate, then allow to cool.

Combine the mixture with the potato and season well. (Editor's note - mashed tattie always needs more seasoning than you think.) Form into small cakes/patties/whatever you care to call them.

These can keep for a while, and may be better chilled. You could also dust with flour - the potato cakes, that is. Fry them in a mixture of butter and oil until lightly browned and heated through. Serve with the spinach on top (or below - your choice) and a poached egg (definitely on top). 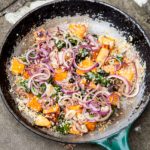 Now, while this dish looks very pretty, I'm not sure it's for me. Regular readers will know how much I hate sweet potato. Almost as much as my friend PM hates kale. She posted yesterday that the reason you add olive oil to kale is to make it easier to slide into the bin. And does anyone really enjoy, as opposed to thole, quinoa? Still, it is a vegan dish - never let it be said that this column doesn't cater for all tastes.

Cook the quinoa in salted water for 15 minutes, then drain. In a frying pan, soften the red onion slices then set aside. In the same pan, brown the sweet potatoes then lower the heat and cook until they are soft. Once they are cooked, stir in the kale and quinoa and mix thoroughly to heat through. Season to taste. Serve with the red onion slices strewn over the top and, if you like, a few chopped dried apricots for extra colour.

Thanks to Christopher Trotter for permission to reproduce his recipe. Christopher is Fife’s Food Ambassador. He has produced an invaluable series of vegetable books in addition to Kale.

For more information see his website. In addition to his writing and media work he runs cooking classes and workshops of all sizes and to all specifications.

All images courtesy of Caroline Trotter Photography, apart from the image of the book, taken by me, and featuring another photo of Caroline's.