In December I highlighted a few food books and cook books which looked promising as presents for people of quality who know and love their food. And, would you believe it? I now find myself the proud owner of most of them. It definitely pays to advertise.

TASTE: My Life Through Food 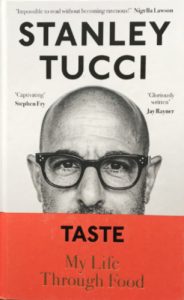 Don’t go food shopping when you’re hungry, they say – you’ll blow your budget. For a different reason, I counsel against starting this book when you’re peckish. If you do, raging, ravenous pangs will soon follow.

If, like me, you’re not much of a movie buff, you might not immediately place Stanley Tucci, though you’ll probably recognise the face. I remember him from The Devil Wears Prada, and, perhaps most fittingly, from Julie and Julia¸ in which he plays Paul Child, husband of culinary trailblazer and heroine to most foodies, Julia Child.

This is an autobiography with a twist – and also with a dash, a pinch and a soupçon. The subtitle tells it all. Tucci is a man who always seems to be hungry: one who, damn his teeth, maintains an immaculate figure despite that. He was at one time a model, for God’s sake. Born in the States of Italian parentage, his first wife died young. He now lives in Britain with his second wife and has travelled widely for work and gastronomic reasons. He seems to have been influenced as much, if not more, by the latter than the former.

The multi national food background enables him to cast a wry eye on all sides. You will chuckle at the reaction of his Italian parents to his English wife’s way of roasting potatoes. (I don’t think we Brits will take many medals from the Italians in the Culinary Olympics, but that category is a sure fire gold for us.) While he may have been brought up filling his face with peanut butter sandwiches during the day, Italian dinners inculcated in him a love of good food. Good does not mean fancy. Know anything of la cucina italiana and you will understand that simplicity is queen, allied to quality of produce.

Unlike many who purport to write about lives through food, Tucci’s memoir isn’t an endless reminiscence about haute cuisine dinners – though it has its share of memorable meals. And unlike the autobiographies of many famous personalities, it is completely without ego or self-aggrandisement. The self-deprecating style is a delight, and I really, really want to try some of the many recipes which he gives. There is great warmth; there is great style. I would love to have Stanley at my dinner table.

If you do pick this book up late afternoon, make sure your ragù is bubbling gently and that your pasta water is simmering, ready to come to the boil at a moment’s notice.

Of the three books featured today, this was the one I looked forward to most. I was a huge 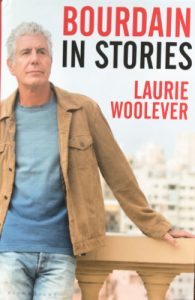 fan of Anthony Bourdain, from his iconcoclastic Kitchen Confidential which appeared in 2000 through to his tragic suicide in 2017. For those of you who are unfamiliar with his work, Bourdain's first book was variously described as the first frank look at what goes on behind the doors of a restaurant kitchen since George Orwell, and Elizabeth David written by Quentin Tarantino.

That fame led to books and food travel programmes such as Cook's Tour and No Reservations, some of the best TV food shows since Keith Floyd. This book was assembled by Laurie Woolever, who acted as Bourdain's assistant over a period of years. It is not, she says firmly (and inaccurately), a hagiography. It is in fact, two things. A series of reminiscences, in chronological order, from about 90 people who knew the man: and also a crashing bore.

There is very little new here for anyone who has read Kitchen Confidential and who is therefore aware of the drug use and self destructive behaviour, or for anyone who watched even one of his programmes, in which his charm and charisma came through.

200 pages into the 463, I started skipping to every tenth page. By the time I got to page 280 we had but two years of his life to go, but another 180 pages to plough through. I rarely give up on a book, but made an exception here. What a waste of 20 quid. Spend it on a good bottle instead, and drink a toast to the great, but flawed, man.

The Kitchen Cabinet - A Year of Recipes, Flavours, Facts & Stories for Food Lovers 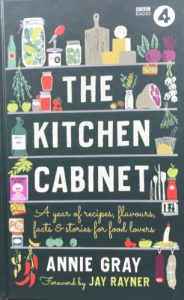 If you are a fan of Radio 4's The Kitchen Cabinet (or TKC as we aficionados have come to know it) you will know what to expect, and love this book accordingly. If you're not - and why on earth not? - you have much unexpected pleasure to come. The format is that Jay Rayner chairs a panel of food experts (NOT celebrity chefs). They have been given a little notice of topics and questions from a studio audience in whatever part of Britain the programme is coming from. This book brings it all together and, if we're lucky, may become an annual event, something for the Christmas stocking instead of Oor Wullie and The Broons.

As with all the best foodie things these days the emphasis is on seasonality, but there's room for plenty of off-piste stuff and disagreements, always conducted in the most amiable manner. You will learn things. You will want to shout at them when they get things wrong. For example, they seem to think you can't cook kippers without stinking out the house. For goodness sake, did no one tell these people to put them in a deep tray and cover them with boiling water? And, panel, the way I was taught to cook omelettes (hot and fast) is definitely superior to yours.

You may listen and wonder whether your leg is being pulled. The section on beer, for example. Do the panel really indulge in beer floats, one example being chocolate stout with salted caramel ice cream? But the idea of cooking oxtail in beer then making the meat into burgers sounds intriguing. Or the recipe for the ideal bacon sarnie, an integral part of Jay's Last Supper menu. Or why Barrie Smith reckons that wasabi nuts are a great accompaniment to whisky.

You will also learn tons. There are recipes galore, and many fascinating facts to follow up. Expect to read more here about Collop Monday (the day before Shrove Tuesday, apparently), once I've discovered more. (Now published. See A Food Day of Note.)

Like the programme itself, the book is a delight.