I couldn't tantalise you with Wednesday's On The Side column about the development of chocolate without bringing you something to get your teeth into. To make sure my own sweet shortcomings don't get in the way, I bring you offerings from two maestros, Sarah Mellersh and Lesley Johnston. 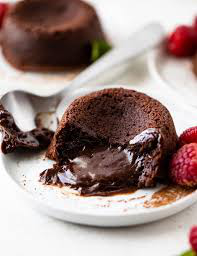 This is a fabulous recipe. Under no circumstances over cook it. The huge pleasure is cutting into it and having the flow of molten chocolate ooze out. I have on occasion had problems with them sticking to the moulds - make sure these are well prepared.

Preheat the oven to 180˚C/Mark 4. Brush 4 pudding moulds/ramekins well with butter, then coat the buttered side with cocoa powder, tapping off any excess. Pause to check that you have in fact coated the inside of your moulds, which failing stop and start again. Transfer the moulds to a baking sheet.

Place the chocolate and butter in a double saucepan if you have one, or in a heatproof bowl over (not touching) a pan of barely simmering water. Stir until the chocolate is melted and the mixture is smooth. Take the bowl off the pan and stir in the vanilla extract. Allow the chocolate to cool slightly, but not set.

Put the eggs, egg yolk and sugar in a large mixing bowl. Using an electric beater on a high speed, cream together until the mixture is thick, pale and fluffy and has doubled in volume. Add the cooled chocolate mixture, then finally fold in the flour.

Divide the mixture among the moulds. Fill each so it is ¾ full. Bake for 12 - 14 minutes, depending on your oven. For an efficient modern oven, 12 is enough.

You could serve these in the mould. While that avoids the risk of them sticking you won't get the lovely dramatic effect. Better to turn them out on to a plate. Dust if you wish with icing sugar or cocoa powder or both. Serve with whatever you like - cream, crème fraȋche or whatever. For me, vanilla ice cream is best, the cold ice cream contrasting with the molten lava of hot chocolate. 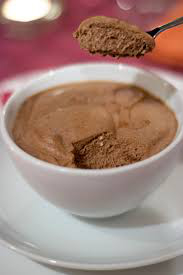 This is a show stopper. If we were catering for a party for our friends without this on the table I fear there might be a near riot. It's based on a Delia recipe, but minus the cream and the booze. Delia would serve this in individual glasses. Lesley just makes a big bowlful. A word of warning: fisticuffs can ensue over who gets to scrape the bowl.

In Delia's recipe, once the mixture has set, and just before serving, she makes a few holes in the surface and pours booze in. The obvious contenders would be brandy or rum, but you could use amaretto, or whatever you fancy. If you want to be more cookery school like, decorate as your imagination sees fit.