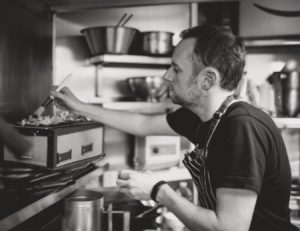 I’ve been a chef for about 11 years now.

It really wasn’t planned at all. After spending some time at university initially studying law I eventually graduated with a degree in audio technology with multimedia (bit of a change in direction admittedly) and had ambitions of going to work in the Film & TV industry in London. During my final year though, I had taken a job in a friend's bar/restaurant washing dishes for some extra money and as a keen home cook I actually ended up doing a lot of prep for the kitchen within that role. Upon graduating, a full time chef’s position had opened up there and what I had planned to be just a few months' work to save some money turned into a slightly longer stint. I haven’t really looked back since then.

Salt. I know there’s an unlimited selection of high class ingredients out there that I could have picked but the reality is that without salt it would be extremely difficult to help the vast majority of them to reach their full potential. If food isn’t correctly seasoned then all the hard work chefs and suppliers put in to get ingredients onto the plate is let down at the last minute. Salt isn’t just useful in savoury food either, it’s great in many dessert components and when you add in the endless potential of using it in processes such as curing, drying, fermentation & preservation it’s a no brainer for me. I can barely think of any other item in the kitchen that can be used in so many ways.

This is the classic tough question for any chef that follows the seasons. I really don’t have a signature dish that would always be present on our menus as they are continually changing. There are dishes that we might go back to each year when the same produce becomes available but it will never really be the same.

In terms of favourite dishes to eat though, it would have to be something shared. I absolutely love whole fish cooked on a BBQ! It’s something I always look forward to in the summer. Sitting in the sun with something like a whole John Dory cooked over coal with some kind of delicious butter poured all over it, a good salad, some bread & a good bottle of white wine. It doesn’t get much better than that.

Our Japanese Konro BBQ that I bought when we opened Fin & Grape. It means it's BBQ season every day we want it to be. The flavour you get from this thing is just off the charts! As much as I’m pretty confident in my own ability to get extra flavour into ingredients, you have to work very very hard to compete with what this brings to the table.

Another really hard question. I’m a bit of a cookbook fanatic so there’s always been many other chefs that I admire from reading all of them. In particular though, Fergus Henderson for his approach to nose to tail cooking, Nathan Outlaw for the simplicity and precision of his fish cookery, and Thomas Keller just because he’s always seemed like such an icon of the industry globally. I’d have to mention Matt Orlando at Amass in Copenhagen too. I went there to do a short stage a few years ago. Whilst the food there is spectacular what I was really most impressed with was their approach & dedication to sustainability and the reduction of waste. It’s a massive problem in the industry worldwide and we’d be much better off as a whole if we all aspired to work a little more like they do.

Aside from chefs though, I’d really have to say a lot of the farmers, suppliers and producers that work so hard to get our produce to us. We’d be nowhere without them!

Not really, I’m not at all fussy, happy to try anything and I’m very grateful that I don’t have any food allergies. I really don’t like to eat food that I can just tell someone hasn’t taken any care to prepare though. It’s too often the case that really good ingredients just haven’t been looked after or cooked properly. It’s always a shame.

Comfort food: it’s a toss up between macaroni & cheese or lasagna. I’d be delighted with either. Guilty pleasures: I probably have more than I should. Crème caramel maybe, can't get enough of it! I love a prawn mayonnaise sandwich too.

Sadly the list is quite long and difficult to choose from. One standout moment would be a customer ordering a well done steak because they were a vegetarian. I still can’t believe it when I think about it.

A common customer issue though (and it drives me up the wall) is watching people season their food before they taste it. I’ve lost count of how many times I’ve seen it done in places that I’ve worked & then had the dish sent back for being too salty. I don’t put salt and pepper on our tables for precisely this reason. We are of course, more than happy to provide it if we’re asked for it but we’d prefer if the food was tasted first.

On The Side asked Stuart to provide more detail about his restaurant. It is on the site of the former bia bistrot at Edinburgh's Holy Corner. Many of you won't have had a chance to visit it yet, as Stuart could hardly have been more unfortunate with his timing for opening a new venture. It was one of the last places which Tom Eats! was able to visit before lockdown. Read the  review here and get there as soon as you can. 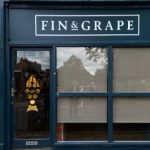 At Fin & Grape we have a keen focus on fish and wine. We try to source all of our fish from Scotland or, if that is not possible, from the UK and we take sustainability seriously. We try to purchase our fish (and all of our other products) from smaller suppliers & producers and in such a way that reduces waste for those suppliers. This often means ordering whole fish, whole animals (or larger cuts), vegetables in their natural state, etc. and always working within the seasons. Our menus are concise and change very regularly to keep things fresh & interesting for the guests. Our wines are generally sourced from within Europe, with the same ethos applied as with our food. Unfortunately we can’t supply or serve any of these at the moment but when the time comes we will have an interesting selection both by the glass and by the bottle.

We are very sad that we cannot welcome guests into the restaurant at present but we have adapted our menus to offer both a Grab and Go service at lunch times (Friday-Sunday) and also an At Home service for collections at the weekend. Details of these and weekly menus can be found on our website  or on Instagram and Facebook @finandgrape.