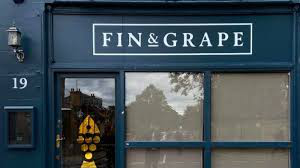 Back in the day when I used to be involved in the purchase and sale of licensed (and other) businesses I often had to explain some unpalatable facts of life to those new to the trade. One of these is that when you buy a business as a going concern, you automatically take on the existing staff, whether you want to or not. Trying to get rid of them can be an unbelievably expensive process, as many have found to their cost. When Stuart Smith took over the business which used to be bia bistrot at Edinburgh's Holy Corner, he may have had regrets about the timing, but few, I suspect, about inheriting Marc and Fiona.

Marc has served under four owners on the site. He is apparently the wine expert, sadly not much use in Tier 3. He arrived from Paris some 30 years ago to improve his English and stayed. I also suspect that Stuart had no idea he was inheriting Ms Memory. I ate in bia bistrot once, in March 2019. I had met co-owner Roisin once before that. We had a chat and I reviewed the place. Fast forward to December 2020. Hello, said Fiona, didn't you write a blog about Roisin? Whaatheheglbgl?!!, I replied, more than a little amazed. (Bear in mind that my picture doesn't feature anywhere on this site.) Ah yes, she said, I recognise your voice. And she remembered where we were sitting: and before you start making assumptions, we were in a very well behaved company (with the late Long Tall Jim K and His Elegant Friend). Extraordinary.

Stuart is one of those chefs who has put in about 15 years' graft learning his trade, but still looks about 25. As you will have guessed from the restaurant name, fish is his specialty, but there are a couple of meat options. The menu is predominantly small plates, six savoury and two puds. From the lunch menu you can have any three dishes for £15. (Sadly, having opened in October, Stuart hasn't yet had the luxury of designing a dinner menu). I quite like the small plates set up. Very fine exponents are The Ox and Finch in Glasgow and Noto in Edinburgh; however, it can start to get confusing when you add larger plates in to the mix. The small plates idea involves the dishes coming out as and when they are ready. A cynic would suggest that this saves chef the inconvenience of trying to coordinate things at the pass. And when you order, as I did, a special from the blackboard at £22, you wouldn't want this to be arriving before a starter size dish. Sensibly, Fiona got the message to the kitchen and all was well.

Yet had we stuck to the 3 for £15 lunch we could have been out remarkably quickly. With a one o'clock reservation, four dishes were on the table by twenty past. But let's leave the logistics to one side and look at the food. Goujons of plaice were firm, pearly white strips of the freshest fish, one which can often be a little slimy. A salt cod mousse was good and livened up by a bright green herb oil, parsley and dill I think, with great toasted bread on the side. Chicken thigh yakitori (cooked on bamboo skewers) were advertised with furikake and lime. That's wee bit of a cheat. Furikake simply means sprinkled over, a reference here to the sesame seeds. The net result, however, was an excellent, succulent, tasty dish. For me the cleverest plate was broccoli with a Caesar dressing. The broccoli had been cooked then charred on a hotplate before being dressed.

You can begin to see the range of Mr Smith's repertoire. This was vividly evidenced in the day's specials on the blackboard. You could have had an Asian inspired dish of octopus with a Thai cucumber salad, or  classic French mussels with white wine and garlic. My main course, if I may describe it thus, comprised two beautifully cooked chunks of brill hiding some slow cooked heritage carrots, topped with chanterelles in a bowl of the fish juices and brill butter. The only trouble was that L had finished all her food and had to watch. Manfully she helped me with the (very good) skinny fries and aioli which we had ordered in the interests of research.

There was a choice of two puds, so we sampled them both. They were part of the 3 for 15 section. I don't know what they would do if you wanted to go for one starter, one large plate and one pud. Conveniently our total consumption comprised six small plates, plus one large, which made the bill easier. Spiced fruits with a streusel topping were, sadly, a little one dimensional. It tasted more like a breakfast dish. The chocolate pudding, on the other hand, was anything but, although the billing of chocolate mousse, miso, squash sounded odd. A gloriously rich mousse had a crunchy topping of seeds and a blob of moreishly salty miso in the middle to enhance the flavour. A little squash purée added colour, but little else, and I could have done without the little pieces of squash and the blob of Chantilly on top. Some minor modifications and this is a real world class number.

They let themselves down with some truly vile coffee (which Fiona removed from the bill) but we came out having thoroughly enjoyed the meal. Bear in mind the fact that this business has barely got off the ground. There is a talented and imaginative chef pushing out very well executed dishes, at prices which are keen even by the standards of neighbourhood bistros. Please give this a go when circumstances permit. I write this not out of pity, but because you will enjoy the food and, like us, may be charmed by some of their little idiosyncracies.