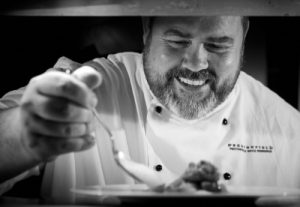 I have been a chef for over 35 years ever since leaving school.

My father was a publican and as I had no real direction in life at 16 years old he suggested I attend a general catering course at a local college. There was a young chef lecturer there who ripped up the rule book and showed us that the only real thing to hold you back was your imagination and that was that, I was hooked!

I don’t have a favourite ingredient as such. I look forward to the best produce coming in that’s in season whether it’s rhubarb, strawberries, asparagus, mushrooms and, of course, game. One of the mainstays on our menu is roe deer. It only really makes way for lamb in season, then back to roe deer.

I enjoy all food when it’s at its best in season but one of my favourite things to eat is a pot of shellfish (lobster, langoustine, crab, mussels, clams) cooked in white wine, butter, garlic and parsley. Don’t forget the crusty bread on the side.

FrimaVario cooking centre.  This piece of equipment can do pretty much everything (plancha, fryer, water bath, slow cooker, pressure cooker, saucepan, stock pot boiler).  We have a smaller one in the Rhubarb kitchen and a large one in our new Stables events kitchen where we can use it for up to 500 portions of roe deer loin or beef fillet.

I have a huge respect for every chef who cooks well and has lasted the test of time in our industry. I also have enormous respect for suppliers who grow/breed for flavour and not for size or speed.

I’m not a huge fan of pasta or over worked ingredients. One thing I have eaten and I won’t rush to try again was guinea pig which is a regional speciality of Cusco in Peru. I think that it probably wasn’t prepared as it should have been.

Freshly grilled Greek or Turkish food like lamb kebabs with fresh salads and feta or curds while sitting in the sun.

If I’m going out to eat, and I can’t get a table at your place, where should I go?

I love going to The Witchery (owned by the proprietor of Prestonfield House - Ed) but even I have difficulty getting a table!

I’ve had some truly memorable meals over the years. The Fat Duck, Bray, Moor Hall, West Lancashire, and Andrew Fairlie, Auchterarder were all outstanding.

It would be rude to talk about customers but kitchens are exciting, challenging, humorous places full of characters and situations can arise daily. One that comes to mind is when a chef asked the new kitchen porter to pass the stock and the kitchen porter returned with the bones and said chef, here is your stock! (The stock was down the drain.)

Prestonfield House, in the lea of Arthur's Seat in Edinburgh, is a place of opulence and quality. Its website proclaims it to be the most glamorous hotel in town. It's far more than that. It is widely rated in guide books as not only one of the greatest small hotels in the UK, but in the world. To be the Executive Chef there you have to be able to cook a bit. Learn more about what John and his team can do by reading the recent blog about the Masterchefs of GB lunch which he catered for.