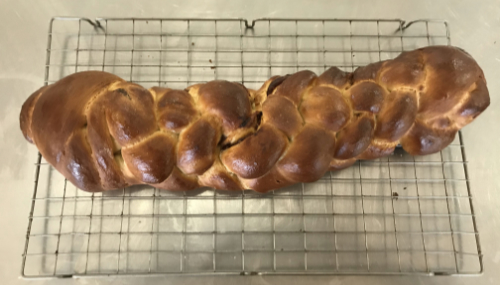 Well, it's Easter and we like to be seasonal, and give you something to celebrate with. To be extra topical, my plan was to feature Paska, a Ukrainian loaf traditionally made at Easter time. It's a sweet loaf topped with a coiled, three strand braid. It's usually jazzed up with saffron, raisins and other fruit. The trouble was that while any recipe I could find made reference to the possible embellishements, none gave any instruction on how to use them.

That plan predated the bread course which I wrote about on Wednesday. Lo and behold, I discovered for the first time challah. It's sweet, it's plaited, and this version is stuffed with a delicious date and orange paste. A couple of wee issues for purists, though. Firstly, challah is a Jewish specialty, so an Easter treat it is not. Secondly the fruit stuffing isn't traditional either. Ash, who led the bakery course, acknowledges that. His response is that as the end result is so delicious, who cares? My thanks are due to Ash and Nyssa of Edinburgh School of Food & Wine for giving me permission to reproduce the recipe.

Before you start, a word of caution. My good friend Mr C, who often comments on these posts, is likely to comment that it's a nice simple recipe. My standard response is that I can only do recipes which are simple. This one, it has to be said, is quite fiddly. It involves making a paste (not hard), making a sweet enriched dough (not that hard), and forming six strands (passing simple). Ah, but then you have to take each strand, stuff it with the paste and seal so they won't leak. Then and only then do you have the fun of the six strand plait. Don't say you weren't warned.

*If using fast action yeast, half the quantity.

Beat the eggs, honey and oil together in a jug.

Mix the yeast with enough water to form a runny paste. Put the flour into the bowl of a food mixer with a dough hook attachment. Switch it to the lowest setting and gradually add the water and the yeast paste. With the machine still running, slowly incorporate the egg mixture into the dough. You may need to scrape the sides of the bowl. When the dough is forming a ball and coming away from the sides of the bowl, add the salt and mix for one more minute.

Take the bowl off the machine, being careful to get as much dough off the hook as you can. Cover and leave in a warm, draught free place until doubled in size. While the dough is resting, make the date paste.

Put the chopped dates in a smallish pan with the orange zest and juice. Add enough water to cover them. Bring to a simmer, then cook over a low heat for about 10 minutes until soft. You want all the water to evaporate, so you may need to increase the heat a little, but keep a close eye on to make sure it doesn't burn. Squash the dates with a fork and allow to cool.

When your dough has done its first prove, knock it back then cut it into six equal pieces. Use scales for this - you'll be surprised how far out you can be trying to do it by eye. Flatten  each piece into a long narrow rectangle at least 16 cm in length and at least 4cm in width. Spread some of the paste in the middle of each rectangle, stopping about 2 to 3 centimetres from each end. Then fold the two long sides together, creating a long cylinder. Pinch the ends to seal.

Allow to rest (the dough that is, not you), then roll each piece into a long filled rope. (The recipe I have suggest 60 - 70 cm in length. My recollection is that when making them at ESFW they were a fair bit shorter. My guess would be 40 - 50cm, and other recipes which I've seen agree.) Make sure they're all the same length. 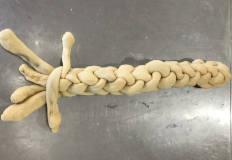 Obviously didn't get them all the same length. Tut, tut.

This is where the fun starts, as you have to plait them all together. Once you get into a rhythm it's not that hard. This You Tube video shows how. (I wish I'd seen this years ago, as the ends of my plaits always look a little messy.

Transfer to a floured baking sheet (one large enough to allow for growth, cover and leave in a warm place till doubled in size.

Preheat your oven to 190˚C/Mark 5. Glaze with the egg wash, trying not to leave little puddles on the surface. Bake for 35 - 40 minutes. This takes a good deep colour. Don't be tempted to remove it too soon. Cool on a wire rack and, as ever, allow to cool completely before slicing.

Thanks once again to Nyssa and Ash of Edinburgh School of Food & Wine (a) for running a brilliant course, and (b) for permission to reproduce their recipes. Click here for more information about the school and the courses on offer.