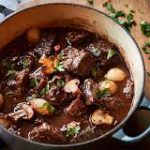 Call this beef stew if you like, but that's akin to saying that Leonardo da Vinci could paint a wee bit.

Today's column was inspired by two things. After being delighted by Felicity Cloake's Red Sauce, Brown Sauce, reviewed in On The Side a few weeks ago, I bought a copy of her earlier work, One More Croissant for the Road. A review of that will follow in due course. Interspersed among the tales of her intrepid jaunt around France on her trusty bike, Eddy, she includes a load of recipes. After all, that's what she does for a living. Most of them had me wanting to drop the book and jump into the kitchen - apart from today's hero. Sorry, Felicity, I found your inclusion of nutmeg, ginger and cloves just plain weird.

The second reason is that I cooked my version recently for friends with whom we were staying in Portugal, and it went down a treat. Take the time and effort required, and it will impress. I say my version, but this is a very close adaptation of the Julia Child et al recipe from Mastering the Art of French Cooking. My copy does fall open at the page. 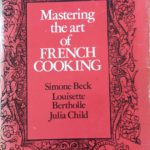 You may have to make a few adjustments. In an ideal world you buy your streaky bacon in a chunk and cut your own lardons, but even in good butchers this is difficult to find. You can buy ready made lardons in supermarkets, though they are rather smaller than is ideal. The traditional onions used at stage 2 are whole pearl onions, sometimes difficult to find and a right b****r to peel. You can use ordinary onions thinly sliced vertically. What is vital is that you don't miss out on the brown braising. I've seen many recipes which simply tell you to brown the onions. If you do, you're missing out on an important layer of flavour. And don't  just  chuck the mushrooms in at the start - the separate sautéeing is important.

Finally a word about the beef. Don't be tempted to use very good quality stuff. Phase 1 of your recipe is done when the beef is ready. It is possible to overcook a stewing cut. Rump is fine, but cheaper stewing steak is OK too, provided it's not too fatty. Make sure the cubes are of a generous size - better to buy the piece of meat and cut it yourself. Prepacked cubed stuff is usually cut smaller than the optimum size.

For the Brown Braised Onions

(If using fresh parsley and thyme it's easier to tie them into a bouquet garni so you can remove the sprigs more easily.)

For the Sautéed Mushrooms

About 500g mushrooms, stalks removed and either cleaned or peeled, then quartered or cut into chunks if large; about 50g butter.

With a normal stew I would generally advocate adding salt and pepper at various stages along the line. Do remember that here you will get a lot of salt from the bacon. I would season the veg lightly at the early stage, but would counsel you to check your seasoning at the end and not to salt the onions when braising or the mushrooms when sautéeing.

In a heavy casserole pan, brown the lardons in some oil. Make sure you get some colour. Remove with a slotted spoon and set to one side. In the same pan brown the beef in stages. Don't overcrowd the pan. Remove and put with the bacon. Also in the same pan, brown the onion and the carrot. If there is any excess oil, get rid of it.

(At this stage, some would dust the beef and bacon in seasoned flour then cook gently for a few minutes to form a crust. I don't. Many would cook it from here in the oven. I tend to do mine on the hob, which I suspect may be cheaper - advice from experts, please.)

Return the beef and bacon to the pan. Add the wine, bring to the boil and cook for a few minutes to let the alcohol burn off. Then add the stock - there should be enough liquid to cover the meat - and chuck in the tomato purée, garlic and herbs. Bring back to the boil, then turn down to a simmer. Cover and allow to cook gently until the beef is very tender. This will take about 3 to 4 hours. If you would prefer to cook it in the oven, have it set at 150˚C/Mark 2.

While the meat is cooking, brown braise the onions. You will need a pan with a lid. Heat the butter and oil hot enough to brown the onions. (More accurately, you want them to be a lovely golden brown colour.)  This will take a lot longer than you think, and be careful not to burn them. Stir regularly. If using the little round onions, try to roll them around without breaking them, so they colour evenly. Add the stock and the herbs, bring to a gentle simmer and cover. You want the liquid to be almost completely evaporated, so you need to keep an eye on it. Remove the herbs and put to one side until needed.

While it's better to cook the mushrooms near the end, you can do them in advance as well if convenient. Heat the butter till it's beginning to foam then add the mushrooms and toss regularly over a fairly high heat. At first they will absorb the butter, then they'll begin to release their own juices. That's when they're done.

When the meat is cooked, sieve the sauce into a clean pan. If you don't have another one big enough, use whatever container you have, then clean the original pan and decant the sauce back into that. Get rid of the bay leaf.

Recipes will tell you to skim the fat. Depending on the type of meat you've used, there may not be a great deal. I find it incredibly difficult to skim a hot sauce. If you have time on your hands, allow it to cool, then refrigerate so the fat congeals. In this dish, I have never felt the need to do this.

Bring your sauce to a boil and reduce to whatever consistency you prefer. Then - and only then - check the seasoning. Bring all the ingredients - meat, onions and mushrooms - together in the pan. Reheat and do a final check for any salt and pepper.

Plain boiled potatoes are traditional with this. I prefer mash, and whatever other veg you fancy.