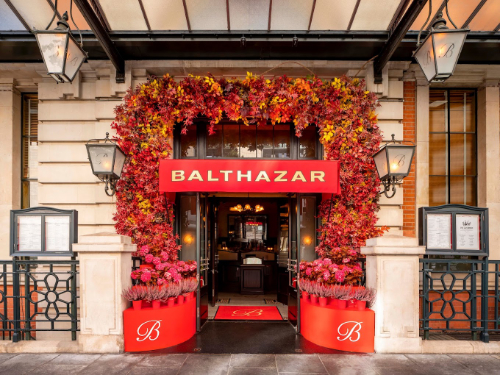 In this ungodly age, it may be necessary to educate some that Balthazar was one of the Magi, the three wise men who were Jesus's first visitors. The wise men, as you know came from the east. Generally recognised as a Very Good Thing.

Well this Balthazar originated as a phenomenon in New York, a Parisian style brasserie. I think I've been there, and it was OK. Set up by a Brit, Keith McNally, it was a stunning success from the time it opened in 1997. Perhaps for the first time, standoffish London started to accept that the New York dining scene was something worthy of consideration. Buoyed by his success, Mr McNally decided, about 10 years ago, to export the idea to Covent Garden. I believe that Chris Corbin, of the legendary Corbin & King fame, was involved, perhaps encouraged by his own Brasserie Zédel, reviewed in this column just a few months ago.

While it was a huge commercial success (and was pretty busy on a Monday night in September when we visited) the critics weren't entirely convinced. Nor, unfortunately, am I. Zédel is Paris come to London: in other words arriving from the east. Geography ain't my strong point, but I think New York is west. Zédel is the real thing: Balthazar London, on the other hand, is just a pastiche of Balthazar New York. Both owe slightly more to Disney than to Paris. Compare Walt Disney's Winnie the Pooh characters to E H Shephard's originals and you get the point.

Let's put British snobbery to one side, and review the experience. The place is large and it's heaving. The welcome is efficient rather than warm, and the early service impressions, based on meeting what would seem to be the maitre d', aren't all that great. Some fizz and some water, please? The fizz arrives, the water doesn't.

The menu is French brasserie, though less comprehensive than, say, La Coupole, or, indeed, Zédel. I still am stressed when the waiter (the maitre d' again) doesn't write anything down. (Why do they do this? It impresses no one, and mistakes are made 50% of the time.) My stress levels increase when, half way through the first course we are wineless. It eventually is brought after a few fruitless attempts to catch an eye.

We start by giving the classics a shot. An soup gratinée was, according to L, a bit Oxo-esque. A little unfair, I thought. I'm not usually a soufflé person, but the soufflé suissesse caught my eye. In concept, this is an indulgent thing, involving a lot of cheese and cream. It was made famous by the Roux brothers at Le Gavroche, where it is served on a lake of warm cream, with multi cheeses on top. This was a twice baked version, tasty enough when a few grains of salt were added, but rather dry.

Main courses improved things. A rump of lamb was both tender and tasty. The little jug of rosemary jus had been properly made with stock. (Please don't write in to lecture me on the difference between gravy and jus. I'm using their terminology.) The only odd thing was the fondant potato. It was about 9 or 10 cm high, perfectly soft, but lacking in the buttery loveliness which is the hallmark of a good fondant. L was considering a burger, but was embarrassed at the fact that this would be disclosed in a review. So she went for a definitely non-French plate. A cutlet of Iberico pork was advertised as coming with a piment honey glaze, merguez sausage, roast peppers and spicy tomato sauce. It was a very interesting dish. I was about to write that it tasted Moroccan, till I remembered that 99.9% of Moroccans don't eat pork. Never mind. Fusion that worked.

Service had remained sporadic until we were passed on to Jorgo, a smiling Albanian. Cheese beckoned. That's a hard one for restaurants. The good stuff is expensive; it's difficult to keep in prime condition; and you just can't avoid wastage. Here they do their best by offering three specific examples. Ever presents, obviously, as the list, Comté, Saint Maure and Fourme d'Ambert, is printed on the menu. And very good they all were too, served simply with grapes, crackers and bread.

Hard to sum up; harder to score. Interestingly, this looks better in hind sight. Better to remember the impressions on the day, when we emerged into the night grumbling lightly.