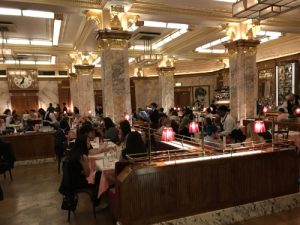 (including a glass of wine) 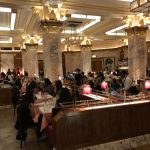 L and I went to France the other day. So what? you say. Most restrictions lifted, how hard is that? To be more specific, it was the journey time that impressed me. Central London to France in 10 minutes, maybe less. That's how long it took us to walk from our hotel in Piccadilly along to the foot of Regent Street, then down into the vast basement which houses Brasserie Zédel.

If you've made the pilgrimage to Paris's Rive Gauche and Les Grand Boulevards, you will probably have given your custom to the likes of La Coupole or Les Deux Magots. How was it for you? Sometimes fun, sometimes less so. The people watching can be good. Withered Parisienne grande dames with a rat sized lapdog peering out of a hand bag, perhaps. Or a proper bohemian of a certain age with a battered paperback recently stolen from a bouquiniste. But admit it. You really wanted to see Hemingway scribbling in a corner, or James Joyce lunching with his family. Back in the day when such places were cheap and cheerful. Look at your bill in Paris today, and there's the rub.

So follow my 10 minute stroll. What was once the basement of a grand hotel was converted by the genius of Corbin & King* to something that resembles the Paris of yesteryear. But better. Early on a Monday evening, the place is packed. Waiters patrol like well organised ants; a dedicated team does nothing but warm and slice baguettes; the air is full of the smells of French classics.

There are times (few, I grant you) when I fear I may have got things wrong in the design of the Tom Eats! column. Rejecting atmosphere as a criterion might have been one of them, today at least. You would have to score this a 20, even before the talented and well disciplined jazz quartet started up.

The menu has everything you would expect from a French brasserie. Bread comes immediately with exquisitely salty butter. We call for a pichet of vin rouge. In most parts of France this is likely to be of indeterminate quality. You know the stuff. The first tasting evinces a wince. The usual comment is along the lines of, well, it'll be OK after the second glass. Not here. A decent fruity flavoursome specimen to keep us happy along with our bread basket.

Time, we reckon, to stick with classics. A suspiciously large prawn and avocado cocktail arrives, the suspicion being that it will turn out to be 90% lettuce below the surface. Not so. OK prawns, good avocado and a decent, not over-cloying sauce at all layers. Rillettes de lapin present a certain problem, namely the lack of fat to be found on a rabbit. A rillette differs from a pâté in that the meat is shredded not minced. The texture was great, and better for the cholesterol than the average. A few grains of salt which we added and a little dottle of the provided grain mustard made everything good.

Steak hâché - hamburger to the likes of us - came in a puddle of peppercorn sauce with some straw frites. For me, it was the one dish which didn't work. I cared neither for the sauce nor the consistency of the patty. Much better was a pork chop, of a size rarely to be found on the counters of British butchers. A good 3 or 4 cm thick, perfectly cooked although the fat, being left unrendered, wouldn't have been nice to eat had you been so minded. There were confit shallots, though they didn't register, and if the Breton cider jus tasted a little too close to all purpose gravy, then who's caring?

We had got through another basket of bread by this time, plus the toast which came with the rillettes. Jacob, our waiter, unwisely tried to remove the last couple of bits. Nay, we said, a little cheese may follow. As indeed it (actually quite a lot of them) did, wheeled on a trolley a l'ancienne. I enjoyed a generous slab of éveque, then slumped.

There were nine puds available and I bet you could guess them all. Tarte tatin - naturally; baba au rhum - of course. And it wouldn't have been complete without ile flottante, possibly my least favourite dessert in the world.

And I haven't mentioned the escargots or the steak tartare; the sole meunière or the choucroute royale; the profiteroles or the crème brȗlée. It doesn't get more French than this. Whisper it, many of these dishes may be better examples than you will find across the channel. And shout it, they will almost certainly be better value.

*A rather sad footnote. Jeremy King has now been ousted from ownership of the company. As of 1 April it is owned by Minor International. There are fears that the exclusive brands such as The Wolseley or Brasserie Zédel may become franchises in much the same way as The Ivy. We shall see.