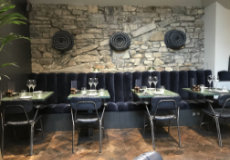 On the White Horse’s interesting website you will find Seafood 101, a magazine with information about their food, their suppliers and their history. Formerly a pub, this is apparently the oldest hostelry in the Royal Mile, dating back to 1742. There is undoubtedly something appropriate about bringing oysters back to the Canongate. In days gone by, there would have been a barrel in every tavern. The website reminds us that the Bank of Scotland building at the top of The Mound sits atop a giant heap of oyster shells. (Perhaps not an ideal building material. Years of litigation followed, due to the damage to neighbouring buildings caused by landslips.)

If oysters can no longer be food for Everyman, The Compass Group who run the place are doing their best with their Buck A Shuck oyster happy hours. These are between 4 and 6, Monday through Thursday, when any one of four native species will set you back a mere pound. There is much more to this place than oysters but, be warned, there is virtually nothing for those who are not lovers of fish or seafood, and precious little for vegetarians. (The one meat dish on the menu comes with tempura oysters.) As I was lunching with fellow omnivores, Scotland’s Greatest Unpublished Novelist and his dad the Former Brewing Giant, we cared not a jot. The menu is a little tricky to follow. Nothing new about small plates of course – 13 on offer here – but there is one main plate size option, a whole fish of the day, 3 sharing shellfish platters and 8 sides. We were guided in our choice by some very nice staff. The recommendation of two small plates and a side per person is about right.

Having concentrated hard to place our order we were able to take stock of our surroundings. The White Horse reopened in 2017. (Incidentally, don’t confuse it with White Horse Close, site of a former coaching inn. That is down at the foot of the Royal Mile: we are just below St Mary’s Street.) It has been very attractively refurbished in an elegant dark grey. Rather oddly, in the corner just behind my chair, was an oar unattached to anything. I have known of pubs where a baseball bat was kept behind the bar. I don’t think there is any connection.

As is normal with small plates places, the food comes out when it’s ready. As ours was one of only two occupied tables, that was pretty quickly. As the lunch was about catchup, (FBG is London based and SGUN has been revising his magnum opus) the food was something of an incidental, aside, obviously, from your hard working reviewer, suffering for his art as per usual.

An interesting selection of food came our way, of varying quality. Crab was a bit of a let down, both as the coating for a Scotch egg and as a large blob on top of the Crab Straw Fries, crunchy little dried up potato sticks that had you yearning for a real chip. The other carbohydrate on the side, a bowl of Hasselback potatoes with curried mayo, was much better. Monkfish Satay was a generous helping of good fish, but we have only the kitchen’s word that peanuts were involved. Charred octopus was probably the star. Perfectly tender, perfectly cooked, but it would have been improved with a squeeze of citrus. Sea bass, on the other hand, had a delicious counterpoint of pickled grapes with little dollops of caviar. A Kimchi Slaw with crispy kale was refreshing as well as stretching the fusion boundaries.

Some dishes are classics for a reason: others remind you why gastronomy moves on. Baked scallops were served in a parmesan and tarragon cream. Perhaps the tastiest and herbiest of the sauces on offer. The scallops were just cooked and no more – I say this as a compliment. Unfortunately they were served in the style of Coquilles St Jacques, with a blanket of whipped potato. Most of us realised years ago that it’s a crime to mask the subtle flavour of the star ingredient in this way. Speaking of classics, you don’t get more standard than a whole lemon sole, advertised as being cooked in chicken butter. This was the Whole Fish option, at a relatively reasonable £25. A fine example, cooked just so, but surprisingly short on flavour.