One or two things inspired this week’s column. Firstly, by a certain good chum, not be named (yet), who has been promising me a recipe for months, and recently embarked on a jaunt to Israel. But secondly, I was sucked into the orbit of the stellar force that is Sudi Pigott, foodie extraordinaire. More on Sudi to follow.

But which Middle Eastern ingredient to major on? The chickpea? No – even your local Co-op will sell you hummus of a sort. Pine nuts or sesame? Little jewels of glistening pomegranate? We are used to most of them. For today, I’ve settled on the walnut or Juglans regia. If you think it’s not exotic enough for you, just remember that the King of Spain’s daughter came to visit me. All on account of my little nut tree. I’ve also chosen it because, to be frank, we in Scotland don’t have that close a relationship with walnuts. Used primarily in baking and confectionery, but not your cheap sweets of dormant memory. Walnut whips were the poshest of the posh, the thickest chocolate to be had, with tooth achingly sweet whip. Early specimens contained two walnut halves, one on top, one within. I was always glad of a friendly adult on hand to scoff the nut part – I hated them.

But journey with me to the Middle East. My guide has been Yottam Ottolenghi. It took a while for his necessary ingredients to become available, but good things are worth waiting for. The first, muhammara, I have been making for a while. I probably pinched the recipe from the great man: if so, I apologise, a payback for the £000s I’ve spent in his wonderful restaurants. 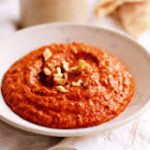 This is fantastic as a dip served with flatbreads or, for a complete culture clash, nachos. The purists would have you make this by hand in a mortar and pestle. I use a blender, but it is better to chop the walnuts by hand, and use the blender on pulse mode to avoid turning everything to mush.

Roast the peppers in a tray in an oven at 200°C/Mark 6 for 30 – 35 minutes. Don’t worry if the skins blacken – in fact that’s a good thing. Set aside until cool enough to handle, then skin and deseed. Put in a food processor with the garlic, cumin, chilli, breadcrumbs, lemon juice and pomegranate molasses. Pulse together, ensuring that some texture still remains. Transfer to a bowl and stir in the walnuts, a couple of large pinches of salt and the olive oil. Adjust from here with some more pomegranate molasses and salt to reach a good balance, remembering that this is intended to be a strong flavour. If you like, drizzle with more oil before serving. Truth be told, I’m not one of life’s great drizzlers. Oi, I said driZZlers! 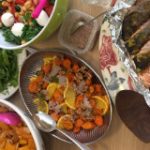 I ate the tahini at Sudi’s food writing course in Bermondsey last week. I asked for the recipe. Not only did she provide that, she gave me this brilliant carrot dish often eaten at Rosh Hashanah, which, this year, begins on 29 September and ends on the evening of 1 October. So, to Sudi, thank you and Shanah tovah!

For the walnut tahini dressing

Pre heat the oven to 200°C/Mark 6.  Roast the walnuts for 5 minutes.  Blend the ingredients then add a little water to make a thickish pouring dressing. Season to taste.

For the carrot salad

Place carrots in a large ovenproof tray, drizzle with olive oil and sprinkle with baharat.  Roast in the same oven for 20 minutes, turning half way through   Then add the orange and honey and cook for a further 10 minutes.  Allow to cool, then dress with the tahini and garnish with some extra walnuts and the chopped parsley.

Sudi Pigott is a journalist, food writer, restaurant consultant and bloody good cook. She is the author of various books including How To Be A Better Foodie and Flipping Good Pancakes.

She also runs food writing courses. From personal experience I can say that after a day spent in the company of the effervescent Ms Pigott, you will have learned a great deal about many things, including, but not restricted to, food writing. Find out more at https://www.sudifoodie.com