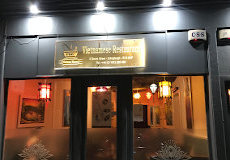 Picture yourself, if you will, back in the days of the Edinburgh Enlightenment. Now I am referring to a time when people of learning and talent, nay genius, would convene in grand houses and literary salons or, more probably, in gentlemen’s drinking clubs in back street taverns. This of course, has to be a romantic vision, ignoring the poverty, malnutrition and disease which was rife. (Even a well to do family such as Walter Scott’s was not immune – Scott had five siblings who died in childhood.)*

Anyway, this talk of literary giants brings me rather neatly to the luncheon which is the subject of this week’s blog. Fresh from his triumph as last week’s guest reviewer, the Former Media Mogul and J, the long suffering Mrs FMM, joined L and me in our quest for culinary greatness. Last week’s column was written by FMM and edited by me. As you would expect there was earnest discourse over the end result. Should that semi-colon have been a full colon? Did we overdo the parentheses? Were we light on the bathos?

You really thought that? You clearly have not been a witness to our regular trysts during which, in best Edinburgh 18th century fashion, we dine well if not wisely. After a quick stiffener in The Jolly Botanist around the corner, we were off to today’s venue, to continue ranting at all is wrong in today’s world (everything) and debating how to put it right without mass murder (almost impossible).

If you need somewhere to calm you down, come to this no frills establishment. I recently read a review describing it as beautifully decorated. Hmm, this establishment has much to offer but you don’t come here for the décor. Mr & Mrs FMM had visited before and enjoyed it, which is recommendation enough for us. We’re also planning a foody jaunt to the place itself (Vietnam, not Grove Street) in a month or two’s time, so it seemed a good idea to have a rehearsal.

The national dish of Vietnam is pho. In essence this is beef broth in which you cook noodles and pretty much anything else you fancy. Originally from North Vietnam, it moved swiftly south in 1954 with the mass emigration following the partition of the country. Vietnam, or Indochina is it was then known, was colonised by France, and some claim that the word pho comes from the French pot au feu. That seems pretty unlikely, but the French did always leave at least a bit of their culinary legacy behind wherever they went. (The first hawker tricycle I ever saw in Cambodia was selling baguettes of a quality equivalent to any I ever ate in Paris.)

Steaming bowls of the stuff are available here, and are clearly enjoyed by the owner’s fellow countrymen. We, on the other hand, didn’t try any. A mistake perhaps, but we were on a sharing mission. It’s hard enough slurping your own way through a bowl of the stuff, without passing it on to slurpers 2, 3 and 4.

Starters, however, were easy enough. Plates of spring rolls (both fresh and fried) and of fishcakes come in threes. ¾ = 0.75. Dividing each one up equitably might have caused some problems; however, our lovely server Na (I hope I’ve got that right) ensured that four of each were provided. Served with different dipping sauces, they disappeared in a trice. On to mains. If I am being critical, a beef stew and a pork in caramel sauce might have been tricky to separate in a blind tasting, but both good. I can’t remember everything else we ate, but lotus rice was probably the star of the show. With the exception of Balinese black rice pudding I have yet to find an eastern dessert I like. Examples on offer here were mostly ice creams, so we passed, and opened another bottle of wine instead. They don’t have a licence here, so it’s bring your own. The “corkage” is an incredibly generous £2 per person drinking. (That’s in total, not per bottle.)

Is this indeed, as they claim, the best Vietnamese food in Edinburgh? I have no yardstick to measure it by, but all seemed pretty darn good to us. I’ll certainly come back when I know more, not only for the food but for the smiling welcome and easy charm to be found here.

* Yes, I know that the Enlightenment is regarded as an 18th century thing, and that Scott didn’t publish Waverley until 1814, but he’s better known than Robert Fergusson or Allan Ramsay. I have an international audience to consider. Pedants.