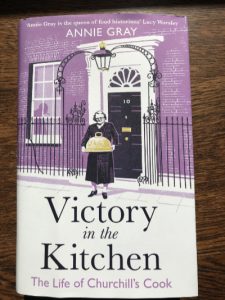 So many books, especially biographies, disappoint. It is therefore the greatest of pleasures to read one which delivers far, far more than it promises. The subtitle of Dr Annie Gray’s latest book is, accurately but prosaically, The Life of Churchill’s Cook. In the introduction we learn that it is a biography of a lady named Georgina Landemare, who worked for Winston Churchill’s family between 1940 and 1954. Well, you may say, is there really anything further to write about Winston Churchill than already exists in print? But make the modest investment (£16.99) to acquire this volume and you will be more than adequately recompensed.

Born Georgina Young, the subject of this work had already established herself in service as a cook, before marrying a distinguished Parisian chef 25 years her senior. From there her career sky rocketed, the skills she acquired from her husband allowing her to make her mark in the male dominated world  at the top of the culinary tree (and charge accordingly). The Churchills were apparently notoriously difficult employers. For a staff member to stay for 14 years was no mean feat, but to remain on friendly, even close, terms with the family as Georgina did after her retirement was almost unheard of.

This book really isn’t about Churchill himself. As befits the author’s title as food historian (she is a regular on The Kitchen Cabinet, and features often in programmes by James Martin et al) Annie Gray offers us a wide panorama of social history. Looking at Georgina’s introduction to the world of work, Gray considers the role of domestic servants in a considered manner. She avoids both the cosy Upstairs Downstairs approach on the one hand and, on the other, the by gum, it were grim depiction of service as the new slavery. We also learn much about late 19th century Paris from the description of the early years of Paul Landemare, Georgina’s husband. We are used to the elegance of Haussmann’s architecture, but here we have the excitement of growing up at a time when that new Paris was being created, as also the horrors of its siege during the Franco-Prussian war.

We also witness the changes in food styles which transformed British cuisine during Georgina’s long life. This, like every other part of the book, is expertly handled. Annie Gray not only knows about the history of food: she knows about cooking it. Some fools would have it that cooking is mere science. The best rebuttal of that comes in Gray’s attempts to encapsulate Georgina’s excellence as a cook, describing the delicate interplay of recipe and experience that (mark) the culinary expert from the enthusiastic amateur.

If there is one criticism, it is that I would like to have seen a few more of Georgina’s recipes, of which she left many. There is a published collection of these, so perhaps there were copyright issues. What is certain is that after her success with The Greedy Queen, which gave us the eccentric eating habits of Queen Victoria, Annie Gray has produced another major work which is as readable as it is informative.

Victory in the Kitchen

The Life of Churchill’s Cook