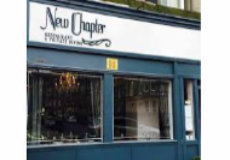 You may remember a sad song which came from a cavern in a canyon, home to a miner, 49er, and his daughter Clementine. The narrator was an unfeeling cad. After the death of the unfortunate lady, he claims to have missed her, till I kissed her little sister, and forgot my Clementine.

I operated in reverse order. A good two years ago I embraced this place’s little sister, Otro, in Coates Crescent. (For my fellow pedants that’s both her address and the locus of said embrace.) In my review I mentioned big sister, and said that I hoped to make her acquaintance. With the serendipity which seems to follow me around these days, I found myself visiting her twice in a fortnight, once with the Retired Captain of Industry, the second time to celebrate a family birthday. (These latter things come in clusters as well.)

There have been many restaurants on this site in the past decades. There was an early Pierre Victoire (nice idea at the start, not much missed); an attempt by Jean-Michel Gauffre, of La Garrigue fame to set up a vegetarian restaurant (veggies didn’t drink enough to make it profitable); and most successfully, Le Marché Noir, latterly Duck’s at Le Marché Noir.

The website proclaims a modern menu which mixes European influence with Scottish produce. The site is available in Spanish and Polish, which gives you a clue as to the nationality of the owners. General manager is Matthew Korecki and chef is Maciek Szymik. They apparently met when working for Stuart Muir at Harvey Nichols, which is a pretty darn fine grounding for any cook. Matthew and his wife used to have the highly rated L’Atelier in Morrison Street. Moving on from there, I have no idea where they thought of the name for their new chapter.

Only four years in, there has already been substantial reinvestment. In an area formerly the preserve of shabby chic, they have created an elegant space upstairs and two intimate, Georgian-style, private dining rooms downstairs. 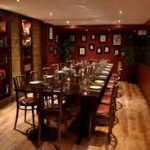 I had assumed that the two sisters would be similar; however, New Chapter is the pampered one in every sense. Otro is excellent: but New Chapter is a significant cut above. I’m not usually short of a phrase or two, but I’m struggling here. I dislike the term fine dining, and it’s not that: yet it’s too good to be described as casual. Why don’t I just compromise and say that the food is bloody good?

Standouts from the a la carte lunch included a (slightly unseasonal, but perfectly seasoned) gazpacho, which the RCI raved about. A starter of crispy quail was up there as well. People get funny about pork being served pink – but with quality meat from Britain or the EU the risk of trichinella (worms) disappeared a long time ago. I don’t mind pink pig, but I have never seen Iberico served as rare as this. The look may have been alarming, but the taste was sensational. Sensibly, they do a more restricted menu for private parties, but there’s no stinting on quality. A salmon tartare was cleverly constructed, a couple of dabs of (good) mayo, a melon ball or two for fun, and toasted puffed rice for crunch. Beef cheeks make a perfect autumnal dish; the ubiquitous sea bass won approval; and the cooking of a generous ribeye steak, seared then basted in butter, was straight out of the text book for Masterchef: The Professionals. Desserts received more mixed reviews, but a dark chocolate crémeux with other bits (probably salted caramel and honeycomb) received massive applause. Service is great too. They are all a cheery bunch, but I have to single out Stavros, who presided over the family fun with smiling efficiency.

Sorry, little sister. Your older sibling may have more expensive tastes -  but you’ve just been jilted.