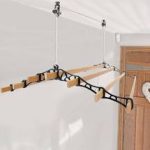 As I mentioned in the recent article on TV chefs, I'm not a fan of Ready, Steady Cook. Of watching it, that is. Being presented with unexpected ingredients and having to rustle something up is quite fun. And occasionally there are external factors which impact upon one's options.

It started when herself went out to the supermarket. Never one to resist a bargain, she came back bearing a large pack of chicken drumsticks acquired for a ridiculous knock down price. (Now there is no point writing in to lecture me about the miserable lives which the owners of said legs must have endured to be sold at such cost. I didn't buy the flipping things. Got that?) The other factor was that the ironing was airing on the pulley. That's the thing in the picture if you don't know what I'm talking about. An excellent piece of apparatus, but, unfortunately, more or less above the cooker. Like any cook, I love good smells emanating from the kitchen door, but not when shirts, jumpers and other things remind you of what you ate a couple of days earlier.

So, something to be done with said drumsticks, preferably in the oven. I have a couple of places where spices are stored. There is a pull out drawer unit next to the cooker for the every day stuff, and a more remote cupboard shelf where the more esoteric stuff is to be found. That was today's port of call. And that's the story of how this very odd, but ultimately delicious, dinner came to be. Ideally you will have a frying pan which can go in the oven. If not preheat a roasting tray to transfer the meat to after browning. (Ras el Hanout is a Moroccan spice, now fairly widely available. Commonly used ingredients include cardamom, cumin, clove, cinnamon, nutmeg, mace, allspice, dry ginger, chilli peppers, coriander seed, peppercorn, sweet and hot paprika, fenugreek, and dry turmeric.) 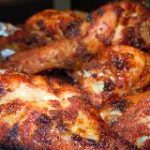 Cut a couple of deep slashes in each drumstick. Mix the remaining ingredients together in a bowl, then add the chicken and cover well. (Easiest done by hand. If you have kids, let them do this. Delightfully messy.) Leave for at least half an hour and get on with prepping the potato wedges. See below.

Pre heat your oven to 190˚C/Mark 5. Put the potatoes in about 15 minutes before the chicken. Brown the drumsticks all over in a little olive oil. Remove from the heat, brush with the remaining marinade and bake for 20 - 25 minutes, turning once or twice, until the chicken is cooked through. Serve and spoon over the cooking juices. We had this with the potato wedges and, even more bizarrely, served on a bed of kale. And darn fine it was too. 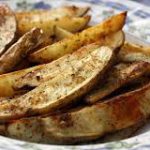 Potato Wedges (allow a minimum of 8 wedges per person)

Coat the potatoes well with the oil and the herbs and sprinkle generously with salt. Spread evenly on a baking tray and cook in the top part of the oven, turning every 15 minutes or so until the potatoes are soft and nicely coloured. This will take about 40 - 45 minutes. If the chicken is ready earlier, fret not. Take it out of the oven, cover it in foil and let it rest. Remind everyone, including yourself, that the pan has been in the oven. I usually leave a cloth or a piece of kitchen paper on top of the handle as an aide memoire.

If you don't have za'atar, use a mixture of dried thyme and oregano. Alternatively, you can use paprika, but be wary if you're using the hot stuff.

Tom Cooks! will return at the end of April.