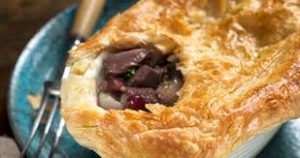 After the festive season (such as it was this year) things tend to get a bit flat. It could be argued, therefore that this is not a time to be getting saucy. In the old Tom Cooks! column I did feature a game pie two or three years ago. This is a different version which I made at the tail end of the year. It will seem a little odd, but it came about because I started musing on the confusing terminology surrounding three classic French sauces, béchamel, velouté  and espagnole. Béchamel is the basic white sauce which we all use on a regular basis, a roux to which milk is added.

Some historical trivia. As ever, feel free to skip the next three paragraphs and dive straight into the recipe. The Italians have made a half hearted claim to ownership of béchamel, suggesting that it began as balsamella from Emilio Romagna. The French will tell you that it derived from Louis, Marquis de Béchamel, a member of the court of Louis XIV, the Sun King. I suspect he wasn't one for spending time in his experimental kitchen, so it was probably something his chef presented to his master as his own creation. In which case the chef was a b****y liar. Celebrated Italian cookery writer Ada Boni, concedes that the sauce is French, mentions our Marquis chum, but says it almost certainly predates him. Just a tad. I present Exhibit A, sauce Mornay.

The legend behind this is that Philippe, Duc de Mornay, a prominent French Protestant nobleman, having narrowly escaped the St Bartholomew's Day Massacre, became right hand man to Henri de Navarre. To claim the French throne, our Protestant Henry converted to Catholicism. Paris is worth a mass, he allegedly said. Philippe's chef created sauce Mornay. It apparently contained two cheeses, Gruyère and Parmesan, symbolic of two strong religions living side by side. The basis of this cheese sauce is, of course, that which we would know today as a béchamel. As the massacre took place over 70 years before Louis XIV was even born, you begin to see the historical anomaly.

Moving swiftly on, a velouté also begins with a roux, but as the liquid is a light stock, it also ends up as a white sauce. (Confusingly a velouté can have milk or cream added, and the two are often mixed up.) Where things start to get sticky (quite literally) is when you start talking about sauce espagnole. This is a brown sauce, starting with a roux to which you have added brown stock, but that's like saying that Leonardo da Vinci could draw a bit. No one outwith a professional kitchen makes it properly these days and that's because making the stock is unbelievably fiddly and time consuming. If you really want to learn more watch this video. (I warn you, even the You Tube clip is 15 minutes long.) So no proper espagnole was used in my game pie, but when I refer to brown sauce, I'm  not referring to HP. End of history lesson.

This is a wonderfully rich recipe. We are still in the game season. I get my game mix from Bowers of Stockbridge, but you can buy it online from many sources. The question with any pie filling is how to get it nice and thick. You can dust your meat in flour seasoned with salt and pepper, or you can reduce your gravy. Or, and this is where I got the idea, you can add some "brown sauce". Or you can do any combination. The black pudding also adds body. We're talking here not about a traditional hot water pastry pork or game pie, but something similar to that Scottish new year staple, steak pie. To those of you who say that meat with a pastry crust isn't a pie, I say, you don't know what you're missing. Remember that your filling will have to be cool before you add the pastry, so start well in advance.

For the pie filling

For the brown sauce

About 30 g each of butter and flour; about 200 ml beef stock; salt and pepper.

Season the game mix with s & p. Brown well and set aside, In the same pan brown the onion. Return the meat to the pan, add enough port and stock to cover it and simmer. (Make sure the port is of drinkable quality, so you can have a gargle if you don't need it all for the sauce.) When the meat is nearly cooked, if the sauce is still quite liquid, take out the meat with a slotted spoon, and reduce the sauce to a thickish consistency. Return the meat. Add the black pudding and the cranberry sauce/redcurrant jelly, and simmer until the meat is done. Check the seasoning and set aside to cool.

While the meat is simmering, make the sauce. Make your roux in the usual way, but cook it out for longer than usual, over a slightly higher heat so that it browns. Stir constantly to avoid burning. Then add the stock a little at a time, as for a standard white sauce. Season to taste. You want the final sauce the be quite thick. Add a quantity of the brown sauce to the pie filling and leave to cool.

Preheat the oven to 200˚C/Mark 6. When the mixture is cool, transfer to a pie dish. Roll the pastry to about the thickness of a £1 coin and spread on top of the dish. It can be useful to put little blobs or strips of pastry on the side of the pie dish to help the main pastry cover to stick. Brush with beaten egg. Make a hole or a slit or two to let the steam out. Bake for about 30 minutes until the pastry is golden and the filling is steaming hot. An accompaniment of mash and peas does it for me, but suit yourself. (This is not a light dish. Not recommended if you're trying to lose weight in January.)