When I first set up the predecessor to this blog, my good friend Michael G, now a proud resident of County Cork, suggested that I was making a rod for my own back. Five years on, I felt well qualified to say I had proved him wrong. That, however, was before lockdown.

Other reviewers have turned to cooking. That's what Tom Cooks! is about, in case you hadn't noticed. Or broader pieces about food in general and the eating out scene. Well, I've been doing that in On The Side since its launch at the start of the year. And I still haven't bought a takeaway. I must confess, finding suitable topics is hard. What do fading rock stars do when they run out of material? Issue greatest hits albums, of course.

In a variation on that theme, I want to look back over the last couple of years and select some of the star dishes for you. Some inspiration, perhaps, for where to go when restaurants reopen. Or if you're not going to eat out, with an approximation of how you could try to make them yourself. But be warned. With one exception, I haven't cooked these myself. This is not Tom Cooks! - theory only here. 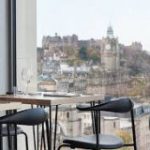 The Lookout by Gardener's Cottage

When I saw this on the menu I was confused. Or let me be more precise. When I saw this on the menu I became more confused than normal. What's the big deal, I asked? My ravioli are made using egg yolks as well. I couldn't immediately inspect the finished article when it arrived as it was covered with a wonderful cheesy foam. Only when the knife went in, and some egg yolk oozed out did I appreciate what I had. It was an open plan kitchen. Later on I was able to observe a (horribly young to be so talented) chef preparing these.

You have been making pasta these past few weeks since Tom Cooks! taught you how, have you not? So that's a breeze. Your raviolo needs to be large enough to contain your egg yolk AND something to hold it. I've researched this a bit. Most recipes suggest a stiff mixture involving ricotta and some seasoning. Some recipes include spinach. Your mixture needs to be able to be piped from a piping bag, but still solid enough to contain the egg. Leaving a good 2 - 3 centimetres to seal the raviolo, pipe whatever mixture you're using  in a circle, with a well in the middle. Pop the egg yolk in the well. The top part of the raviolo should be a little bigger than the base. Seal carefully, then cook for about three minutes. The yolk must be runny.

Top with a thin-ish cheese sauce. If, like most of us, you don't have a foam gun, blitz your sauce with a hand blender just before serving.

Served at The  Lookout by Gardener's Cottage, Calton Hill, Edinburgh. 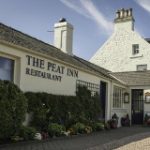 Seared Rump of Beef with Salsify, Onion and Leeks

This sounds like a simple dish. In practice it didn't seem that difficult, but (a) it contained a lot of component parts, and (b) they were all done to perfection. Rump of beef is tricky. Source fantastic beef, of course. But it's not a cut which we amateurs tend to think of as suitable for a short cook. I think the secret is in the word seared. In a pro kitchen this will be done very quickly on a plancha or a Josper grill or the like. The plate arrived: the component parts had to be searched for. Not that this was an ungenerous portion - more like a treasure hunt on a plate. I'm partial to salsify, though I've never cooked it. Underneath that there were uncovered some tiny lardons and a baby onion or two. Some carbohydrate? Of course, a little potato cake, which in turn was nesting on a bed of creamed leeks. The red wine sauce was of a quality you get only when you combine a master chef and top quality stock. 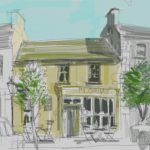 This is simultaneously the most wonderful and the worst looking potato dish of all time. When my Irish based chums returned here, they attempted to wheedle the recipe out of Mark and Sadie. Well, you start by smoking the potatoes. I don't have a smoker, but neither do they. Then you bake them. For how long? No idea. Then you fry them, and top these sad blackened balls with garlic mayo. I would happily travel back to Ireland for this dish alone. 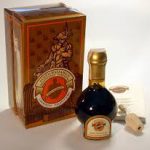 You've actually had most of the component parts of this in past weeks. For the ice cream, put 480ml each of crème fraȋche and buttermilk in a food processor with 275g of caster sugar and 90ml of lemon juice. Blend until smooth then freeze in an ice cream maker.

For more details about the restaurants, click on the links.