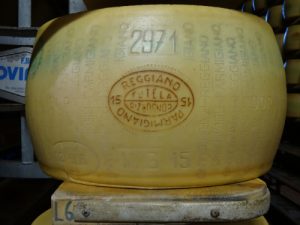 The article on Aceto Balsamico Tradizionale in this week's On The Side blog attracted a lot of interest. Many were completely unaware of the existence of the stuff, as was I before a trip to Bologna, capital of Emilia Romagna, and now my favourite Italian city. The highlight was the food tour. Now before you start complaining that this is the Tom Eats! column, let me assure you that a restaurant will feature. The fact that I can remember neither its name or address is irrelevant. You should be aware that we are living though unprecedented times. 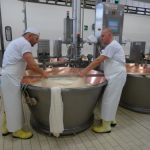 From our beds we were untimely ripped for a 7.30 (am) pickup. Driving at speed into the hills we made one essential stop at the bakery en route to the Parmesan factory. Cows don't do weekends or public holidays. They produce milk twice daily, 365 days a year, and the factory works accordingly. The evening milk is left so that the cream is beginning to separate. When the morning delivery arrives, it's (literally) all hands to the pumps. I've never been a scientist, so I don't fully understand the process, but you heat the milk a bit and add stuff and stir it and so on. For me the truly remarkable thing is that the decision on when to remove the giant ball from the vat is taken, not by machine or thermometer, but by one man, based on touch, instinct and experience. 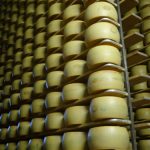 At that stage, they take a break, so it's time for our breakfast. Bread, pastries, salami, parmesan (of course), washed down with Lambrusco. Well, we have been up for about three hours by now. Then we are watching the cheese being moulded and touring the rest of the place. Each cheese is numbered and date stamped. Great wheels of the stuff are stacked as high as churches, and inspected regularly by men with hammers, and ears as sharp as piano tuners. At about 20€ a kilo (2017 prices in Bologna), the value of these rows is incalculable.

On to the Balsamico place. See last week's Tom Eats! for more details. Mid morning snack included cheese and ice cream, with drizzles of the dark brown sticky nectar. And thence to the prosciutto parlour. (The things this column will do for an appropriate alliteration.) I have no idea where all these pigs came from, but there were an awful lot of hams hanging. If you're in Italy and want to order some of the wonder that we know as Parma ham, remember that prosciutto simply means ham. Specify that you want crudo (raw). Prosciutto cotto (cooked) is similar to our boiled ham. We gobbled up a fair amount of the generous free samples on offer, and were 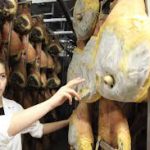 feeling reasonably full by then.

Back in the bus and to the top of an attractive hillside. We may not have been monarchs of all we surveyed, but we were certainly treated as such. Or alternatively, perhaps a better analogy would be pigs being fattened for the slaughter. Tortellini are pasta typical of the region, as are tortelli and tortelloni. We were served all three, with different sauces, one after the other. I don't recall whether the plate of grilled vegetables was a dish in its own right, or whether it accompanied the veal, which was followed by the beef. Cheese probably came before the dolci, all with endless quantities of wine. There were at least four puddings - it would have been rude not to sample them all. Conversation flowed among an eclectic group. Bizarrely, the topic turned to gardening. Lesley was having terrible trouble with slugs. (I was having terrible trouble with my waistband.) This was gently trumped by the charming Indian lady from Kerala, who was encountering difficulties with wild elephants trampling her coffee plantation.

There may have been a snooze on the drive home, followed by a quiet evening. A number of companies run these trips. They're not cheap (from memory about 130€ per person), but you get an awful lot more than you expect. QED. Highly recommended with two pieces of advice. Don't have breakfast, and don't make a dinner reservation.