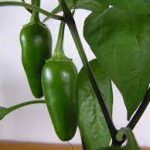 As I said on Wednesday, you can do anything (well, anything that's legal, decent, truthful and honest - this column has standards) with jalapeños that you could do with most other chillies. You'll all have your own favourites, so let's travel a little. Firstly, snacking in the States. Some years ago my eldest offspring was living in the Mid West, so off to Chicago we trotted. A wonderful city. Great architecture, terrific galleries. The food? Hmmm.

They use an awful lot of cheese; not the most interesting of cheese, and  not necessarily used in a good way. It got to the stage that when we ordered a bar snack we were screaming for something dairy free. Dates with bacon? Perfect? No! - stuffed with something tasteless which had originally emanated from a cow. Now, as at the time of our trip, is the early stage of the American football season. A huge thing over there, if incomprehensible to most here. House parties to watch The Game are common. As 60 minutes' playing time can take three to four hours to complete, you need an awful lot of nibbles. The next dish, consumed with a good few beers, goes some way to explaining a burgeoning obesity crisis. 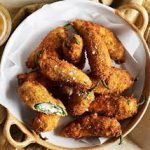 There are variations on this theme. Remember that the heat of our hero chilli can vary. If your pals are sensitive you could use milder examples. Select the largest freshest ones you can find. Some recipes suggest mozzarella in place of Parmesan - I think that would be too bland. You can obviously play around with the stuffing. Some finely chopped crispy bacon bits would add texture. Invent your own variations.

Mix together the cheeses, and season with s & p. Make a slit along the length of each jalapeño, without cutting right through. Carefully remove the seeds. Stuff with the cheese mixture. For this recipe you want to be able to close the chilli up. Remove any excess cheese.

Breadcrumb each jalapeño using the usual technique, ie by dipping first in flour, shaking off any excess, then in egg, then in breadcrumbs. Top tip: use one hand only, preferably your non-dominant hand.

Heat the oil in a deep fryer, deep pan or wok to 160˚C. If you don't have a food thermometer, use the cube of bread test. At 160˚C it will take 30 - 35 seconds for a cube of bread to brown. Cook the jalapeños a few at a time for about 2 - 3 minutes till they turn golden. Drain on kitchen paper. To avoid causing serious injury and astonishing pain, allow them to cool a little before serving. 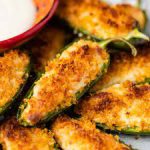 As you'll be cooking these in the oven, you can be more generous with the filling. No need to close the peppers up - you want something boat shaped. Bake at 180˚C/Mark 4 for about 30 - 35 minutes until the chillies are soft and the mixture is beginning to bubble. Then top with breadcrumbs and more Parmesan and cook under a hot grill until the topping has browned. 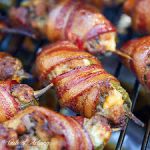 Wrap each cheese filled chilli with half a slice of thin streaky bacon and bake till the bacon is cooked to your liking.

OK, let's get a little healthier with a nice, all purpose salsa. This is known in Mexico as Pico de Gallo, literally rooster's beak. Why? Well, as each explanation I've read seems more unlikely than the one before, I'll let you do your own research. To make tomato concasse, cut a small cross in the base of each tomato then immerse in boiling water for about 90 seconds. Drain the water. When the tomatoes are cool enough to handle, remove the skin. Half them and remove all the seeds and membranes. Chop the flesh into small pieces, about 0.5 cm.

I have to confess that this isn't terribly seasonal, as you want the tomatoes to be quite ripe, and you can't use tinned. Quantities are difficult as tomatoes and onions vary enormously in size. Play around to get a balance that suits you. It's great with most Mexican dishes or you can use it as a dip, albeit a rather messy one. Good in tacos, or with some sort of nibble which can hold a little liquid. 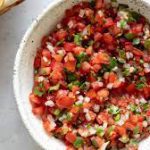 Mix the tomatoes, onion, chilli and lime together with about two thirds of the coriander. Add a little salt to taste. Leave for an hour or so to allow the flavours to mingle. If you refrigerate, remove about 15 minutes before using. Just before serving, check the seasoning, stir in the remaining coriander and possibly a little more lime juice if desired.

Top Tip: To maximise the amount of juice from your limes, put in a microwave at full blast for 30 seconds.

This piece has turned out to be longer than anticipated, so we'll come back to this. You can get the peppers themselves, but it's very useful in paste form. If you have a jar and you don't know what to do with it, try mixing some of the paste with mayonnaise. It can really liven up veg such as broccoli which can be quite dull if unadorned.

As they say at the end of Back To The Future,