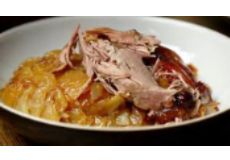 Tom’s Food! will be celebrating its first birthday in a few short weeks. Now if you feel you’ve been reading my reviews and recipes for a lot longer, worry not. You’re not in an early Alzheimer’s stage (just yet). The very first review was written in October 2014 and the first recipe just over a year later. But the biggest leap forward was the creation of the Tom’s Food! site, with its more attractive layout and search facility.

The biggest difference is one which you can’t see, something called Google Analytics. I can see it, but I’m not at all sure I understand it; however, by playing about with it over the last few weeks I have been able to establish the most read recipes. Any previous review of the year has been based on my scoring of restaurants. This one is based on readers’ choice. Interestingly, with the exception of the tortilla, they are all winter warmers, so it’s appropriate that they should reappear now. It would take up far too much space to repeat them at length, so I’ve provided the link to take you there. Incidentally, don’t write in to complain that some are dated 2019. When I started the site, I had to give you more than one article to read, did I not?

Thanks to everyone who contributed or commented in 2020 – please keep them coming – and, of course, thanks to all of you for following.